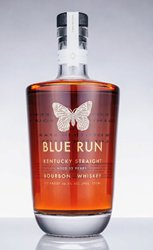 “It was an interesting challenge: how to add contemporary design aesthetics to a centuries-old product.”

An exquisitely crafted 13-year-old Bourbon associated with Kentucky Bourbon Hall of Famer Jim Rutledge is sure to garner attention in the whiskey world, but when matched with modern marketing and cutting-edge design from a Nike veteran, its appeal will stretch far beyond typical whiskey aficionados. Blue Run Spirits today announces the launch of its first product – Blue Run 13-year-old Kentucky Straight Bourbon Whiskey, available this October in the US.

Blue Run Spirits was started last year by a group of friends and Bourbon lovers – a Nike designer, Facebook’s first director-level employee, a hospitality executive, a political advisor and a philanthropist – that wants to evolve the Bourbon industry, creating fine products for the modern whiskey fan. Understanding that could never happen without an exceptional whiskey to start with, they teamed with Jim Rutledge, a 50+ year whiskey veteran and former master distiller at Four Roses, and a current managing partner of J. W. Rutledge Distillery, who serves as the brand’s liquid advisor.

Their first collaboration is Blue Run 13-year-old small-batch Bourbon. This precious spirit is exceptionally smooth and mellow, with a long, sweet and dry finish; little to no burn on the back end – in a striking bottle unlike anything in the category today.

Rutledge carefully approved the selection of Bourbon for the inaugural run of Blue Run Spirits. In this first offering, a crescendo of flavor unfolds sip after sip as whispers of brown sugar and brown butter sauce give way to apricot and golden raisins. On the nose, crisp vanilla and hints of tarragon enhance the experience. Throughout, balance is carefully maintained leading to an exceptionally long tail.

This incomparable Bourbon comes packaged in a striking, modern bottle designed by Devon McKinney, the creative mind behind some of the world’s most-sought-after sneakers. The weighty, hand-numbered bottle is perfectly proportioned, featuring the brand’s signature gold butterfly medallion which symbolizes the metamorphosis of the Bourbon industry as it reaches a broader audience which appreciates fine Bourbon through Blue Run.

“It was an interesting challenge: how to add contemporary design aesthetics to a centuries-old product,” said McKinney. “I think we achieved a perfect balance that will appeal to the younger, more diverse whiskey drinker who appreciates not only an exceptional liquid, but also modern, polished design.”

“We noticed that our broad, diverse group of friends also shared our passion for great Bourbons and ryes and, yet, no brand had reached out to them; no whiskey was speaking to them or shared their values,” said Mike Montgomery, Blue Run Spirits CEO. “We saw an opportunity to share the joy of truly exceptional whiskey, that only whiskey aficionados had enjoyed until now, with our friends, families, colleagues and others.”

Blue Run Bourbon will be available at $169.99 MSRP through Kentucky and Georgia retailers via RNDC and Savannah Distributing Company, respectively, as well as Blue Run’s website. It is exceptionally rare with only 2,600 bottles available in the first run and will be followed by other Bourbons approved by Rutledge.

ABOUT BLUE RUN SPIRITS
Blue Run Spirits is a new kind of spirits company, creating a unique luxury proposition by tapping into the deep heritage and craft that makes a truly great whiskey, then elevating it through a modern design and marketing lens to reach a younger, broader and more diverse whiskey drinker. The company’s founders include a Nike designer, the first director-level employee at Facebook, a hospitality executive, a political advisor, and a philanthropist – all huge whiskey fans and individuals who acutely understand how to build demand and buzz for a contemporary consumer product. They are backed by a team of advisors including Nike marketing experts; the Campari communications veteran behind the US launch of Espolòn Tequila and the Aperol Spritz; a former vice president of innovation from Brown-Forman; a former spirits distributor; and others with deep industry experience. The Blue Run name is a nod to one of our founder’s upbringing in Georgetown, KY, where Bourbon began in the Bluegrass State.