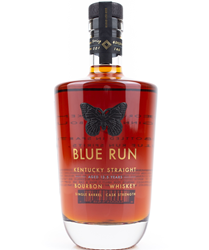 Two Bourbons from recently launched Blue Run Spirits snagged top honors at the prestigious 2021 San Francisco World Spirits Competition – before they are even launched to the public.

Two Bourbons from recently launched Blue Run Spirits snagged top honors at the prestigious 2021 San Francisco World Spirits Competition – before they are even launched to the public.

“A great whiskey brand always starts with a great liquid and we couldn’t be prouder that our Bourbons are being recognized as being best in class,” said Mike Montgomery, CEO of Blue Run Spirits. “Our vision to pair whiskey icon Jim Rutledge with Devon McKinney’s modernized approach to design has proven to be a winning combination as we continue to broaden today’s audience of Bourbon drinkers.”

Blue Run Spirits was launched last year by a group of friends and Bourbon lovers – a Nike designer (McKinney), Facebook’s first director-level employee, a hospitality executive, a political advisor and a philanthropist – that seeks to evolve the Bourbon industry, creating fine products for the modern whiskey fan. Understanding that could never happen without exceptional whiskies, they teamed with Jim Rutledge, a 50+ year whiskey veteran who serves as the brand’s liquid advisor.

Their first collaboration was Blue Run 13-Year-Old Small-Batch Bourbon (113 proof) released in October of 2020 at $169 in select states and online. Each of the two batches sold out in less than one week.

Blue Run Rye Whiskey (95 proof) is expected to arrive at the end of summer. More information on new products will be available at their launch.

ABOUT BLUE RUN SPIRITS
Blue Run Spirits is a new kind of spirits company, creating a unique luxury proposition by tapping into the deep heritage and craft that makes a truly great whiskey, then elevating it through a modern design and marketing lens to reach a younger, broader and more diverse whiskey drinker. The company’s founders include a Nike designer, the first director-level employee at Facebook, a hospitality executive, a political advisor, and a philanthropist – all huge whiskey fans and individuals who acutely understand how to build demand and buzz for a contemporary consumer product. They are backed by a team of advisors including Nike marketing experts; the Campari communications veteran behind the US launch of Espolòn Tequila and the Aperol Spritz; a former spirits distributor; and others with deep industry experience. The Blue Run name is a nod to one of our founder’s upbringing in Georgetown, KY, where Bourbon began in the Bluegrass State.