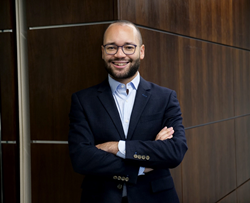 “For years, I have dedicated my time to enhance and protect the dignity of every person in my community, I want to shed light on issues that don't receive a great deal of attention inside or outside the LGBTQ+ community," said Gregory Chambers, MCSE, blumshapiro.

blumshapiro, the largest regional business advisory firm based in New England, with offices in Connecticut, Massachusetts and Rhode Island and Virginia, today announced the City of Hartford has appointed Senior Consultant Gregory B. Chambers, MCSE, as a Commissioner for the City of Hartford LGBTQ+ Commission, a group dedicated to the elimination of bigotry, discrimination and prejudice against lesbians, gay men, bisexuals and transgender persons in the city.

The volunteer position, announced by Hartford Mayor Luke Bronin on February 10, is a three-year commitment that reflects Chambers’ dedication to LGBTQ+ issues both in the community and at work. “For years, I have dedicated my time to enhance and protect the dignity of every person in my community. I am especially focused on addressing the issues LGBTQ+ people confront on a daily basis. It is a passion I’ve developed over the years by listening and understanding the issues that affect our LGBTQ+ community. Also, it’s my way of giving back to the city I love.”

The Hartford LGBTQ+ Commission is comprised of 15 members, all appointed by the mayor and confirmed as members by the Court of Common Council. The composition of this commission reflects, but is not limited to, the diversity of the LGBTQ+ community in the city of Hartford and in Hartford County.

Chambers has set three priorities as the focus of his advocacy: LGBTQ+ youth homelessness, the dignity of the senior LGBTQ+ community and working with first responders to better understand and respond to the medical needs of LGBTQ+ people.

“I want to shed light on issues that don’t receive a great deal of attention inside or outside the LGBTQ+ community,” said Chambers. “For instance, LGBTQ+ homelessness for youth is a growing, heartbreaking issue. The tremendous pressures they encounter from society and their own families is underestimated. I want to make sure they have the resources and services necessary to combat homelessness. In addition, I want to make sure that the LGBTQ+ senior community is treated with respect and dignity, especially when they enter long-term care facilities. At this critical time, some of them go back into the closet to assure they receive quality care.”

Professionally, Chambers has been with West Hartford-based blumshapiro for seven years. Working in the firm’s Technology Advisory Practice, Chambers focuses on data science and analytics. In addition, he is a founding member of blum’s Diversity and Inclusion Committee. “Greg’s interest and dedication to his fellow co-workers is apparent every single day. He invests time to develop strong relationships in the office and goes out of his way to make sure all experience an inclusive and productive work environment,” said Vanesa Rossitto, partner and industry leader of blum’s Government Services Group and partner sponsor of the firm’s Diversity & Inclusion Committee.

blumshapiro is the largest regional business advisory firm based in New England, with offices in Connecticut, Massachusetts, Rhode Island, and Virginia. The firm, with a team of over 500, offers a diversity of services, which include auditing, accounting, tax and business advisory services. blum serves a wide range of privately held companies, government and nonprofit organizations and provides non-audit services for publicly traded companies. To learn more visit us at blumshapiro.com.