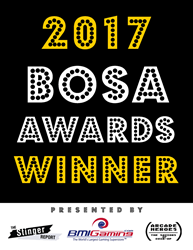 BMI Gaming, The Stinger Report and ArcadeHeroes.com announced the winners of the annual Best Of Show Arcade Machine Awards today. The BOSA Awards is an independent award judged by members of the amusement press and arcade industry pioneers.

The Sixth Annual Best Of Show Arcade Machine Awards, which showcases the best in new and emerging digital out-of-home (DOOH) arcade and amusement innovations as seen at the recent IAAPA Attractions Expo in Orlando, FL, was the most competitive in its history, with the largest number of nominees to date, including a vast array of new amusement machine and DOOH entertainment firms from around the world.

The criteria used to select BOSA Award Winners are based on products reviewed at the IAAPA Expo. Qualifying products are then nominated for BOSA Awards by our panel of judges, then voted upon, with nominees assigned a weighted product score based on these six areas of importance : Originality, Uniqueness, Playability + Enjoyment, Relevance, Market Earning Potential and Product Pricing.

To view detailed information and pictures for all 2017 Best Of Show Arcade Award Winners :
http://www.bmigaming.com/bosa-arcade-machine-awards-2017.htm

The BOSA Awards, first presented by BMIGaming.com and The Stinger Report in 2012, was created to highlight and reward the best in new arcade game and amusement technology, while recognizing and celebrating the vibrant creativity and innovation within the amusement and arcade gaming industry.
.
About The 2017 BOSA Awards Presenters :

BMIGaming.com / BMI Worldwide is a global amusements distributor specializing in arcade
and amusement facility feasibility, design and development to Family Entertainment Centers
(FEC) and Location Based Entertainment (LBE) venues worldwide, with global operations on
three continents. The company has served thousands of clients since its inception in 2012,
from Fortune 500 firms, theme parks, resorts and malls to commercial, residential , retail,
educational and government entities, and its rapid growth has garnered such business
awards as Inc’s ‘Inc. 500’ List, PwC's ‘Hot 100’ List and IRM’s ‘Top 500’ eCommerce Firms.

ArcadeHeroes.com is a widely recognized arcade and out-of-home entertainment news and
video review website that provides readers with a highly reliable source of detailed
arcade industry news, new products, and video product reviews since being launched back in 2006.