'A Mostly Magnificent Memoir' provides a rollicking look at the life of a dysfunctional family in small-town Connecticut in the 1980s. 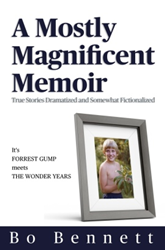 'A Mostly Magnificent Memoir' offers an ideal reading selection for anyone who grew up in the 1980s and could use a couple of warm, nostalgic hours re-visiting one of the greatest decades in pop culture.

'A Mostly Magnificent Memoir,' the newest offering from prolific author Bo Bennett, provides a slightly fictionalized account of the author’s youth growing up in a tragically and hilariously dysfunctional Connecticut family in the 1980s. Often laugh-out-loud funny, frequently heart warming, and occasionally heart-wrenching, 'A Mostly Magnificent Memoir,' is always entertaining.

While Bennett has shared versions of these stories previously in his autobiography ('Some Really Personal, Yet Entertaining Stories From My Life That You Will Enjoy and May Even Find Inspiring'), Bennett appeals to a wider audience with the present volume.

"I've changed most of the names—including my own, and those of my family members—to protect the not-so-innocent," says Bennett. "The truth is, I’ve lived through some pretty unbelievable experiences. Presenting them as fiction, they paradoxically become even more believable."

From dealing with the constant bickering of alcoholic parents, to wrestling a knife away from his enraged mother, swindling friends out of baseball cards, spotting a monkey in his back yard, dealing with the awkwardness of puberty and adolescence, and teenage mischief involving the local police—the list of high jinks and mayhem goes on and on. Bennett shares the incidents with both humor and heart.

'A Mostly Magnificent Memoir,' brings readers back to an ultimately innocent time, long before "social distancing" entered the collective lexicon.

"At some level," says Bennett, "My desire to revisit these stories arose from missing the pre-COVID-19 in-person interaction that, in retrospect, I took for granted. Despite the current conditions and restrictions, we remain a social species. This new book celebrates that aspect of our nature."

Indeed, relationships are the predominant theme throughout the pages of 'A Mostly Magnificent Memoir.' It’s the people that James (Bennett’s fictionalized self) is surrounded by that bring meaning and fullness to his life.

"People constantly come in and out of our lives," explains Bennett. "As much as it hurts when they leave, the best we can do is to be grateful for the time we had with those who are no longer here, and continue to make memories with those who are."

'A Mostly Magnificent Memoir' includes a free bonus PDF download of a screenplay of the story. It's different enough from the fictionalized memoir to be read freshly on its own. Bennett is currently shopping around the film rights—even a cursory look at the screenplay reveals how perfectly the story would adapt to the big screen.

'A Mostly Magnificent Memoir' offers an ideal reading selection for anyone who grew up in the 1980s and could use a couple of warm, nostalgic hours re-visiting one of the greatest decades in pop culture. Moreover, it will appeal to anyone who loves to laugh, loves a great story, and appreciates a tale that hits multiple notes on the emotional spectrum, from amusement to poignancy.

'A Mostly Magnificent Memoir' by Bo Bennett is published by eBookIt.com, and is currently available exclusively though Amazon.com.

About Bo Bennett
Bo Bennett holds a PhD in social psychology, a master’s degree in general psychology, and a bachelor’s degree in marketing. He has published over a dozen books on the topics of logic, reason, argumentation, psychology, philosophy, religion, and critical thinking. He currently runs eBookIt.com, a service for self-published authors and small presses, that he started in 2010. You can find out more about him at BoBennett.com.