Bob Goemans’s new book “Profit...at What Cost?” is a compelling novel about a reporter’s investigation into environmental corruption 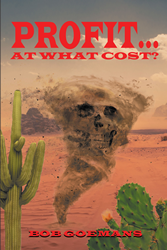 What takes this book out of the ordinary, is that Bob Goemans was well-placed to see the inside activities that can surround troubling environmental circumstances that sometimes may sadly also afflict the public. In providing said services, was occasionally directed by the company’s senior attorney to issue secret contracts, thereby preventing said documents from being seen by the public or opposing legal teams, which has helped provide enhanced realism for various situations throughout the book.

As for these ‘fictitious’ situations mentioned in the book:

These and more ‘eye-opening’ situations of various magnitude are delineated throughout its almost 400 pages, including how coffee ‘was’ decaffeinated for many decades using the degreasing solvent Trichloroethylene (TCE), a known cancer-causing ingredient!

And if you were fortunate enough to view the movie ‘Erin Brockovich,’ then reading ‘Profit...at What Cost?’ will bring back memories of environmental wrongdoings. Those who read the first outline of this novel said it should be made into a movie, as it’s even more riveting and eye-opening!

Are you paying attention, Hollywood?

Follow an environmental reporter and her sidekick photographer as they search for the truth in two highly emotional yet mysterious environmental situations: above-normal births of deformed children in a small town in West Virginia and what finally leads to the death of thousands when an unknown bacterium is unleashed in the Midwest. And since the author actually wrote the terms and conditions, awarded, and oversaw the progress of a similar contract as described herein for the cleansing of contaminated soils at a USAF facility (one that could have unleashed an unknown bacterium into the wild), only its immediate termination by the USAF after its first test result became known may have saved the earth from similar disastrous events as described in this novel! Again, all without the public ever knowing such a contract ever existed!

DO NOT miss reading this novel!

Published by Page Publishing and readers who wish to experience this astounding work can purchase “Profit...at What Cost?” at bookstores everywhere or online at the Apple iTunes store, Amazon, Google Play, or Barnes and Noble. For additional information or media inquiries, contact Page Publishing at 866-315-2708.