“Jesus and the Mystery of the Dead Sea” from Christian Faith Publishing author Bobbie Lou Collom Blumer is a powerful tome that delves into the ancestry and evangelization of Jesus that relates to the biblical text. 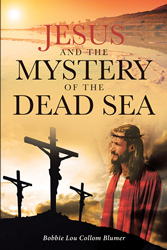 Blumer shares, “Jesus’s father, Joseph, was a descendant of Israel’s King David, as the genealogies in the New Testament Bible make known, and also incidentally of Mary, his mother, only by a different one of King David’s sons. Jesus was of the Essene denomination of Jews, not the Pharisees or Sadducees, and this connection had been noticed in that his brother, James, was said to have worn garments of white linen and to never have used oil on his skin, ways that are mentioned by the historian Josephus as Essene. James was also called an Ebionite, meaning ‘the poor,’ which was used in the Dead Sea Scrolls for the members at Sekhakha monastery, which in modern times is called Qumran.

“Jesus grew up at Sekhakha or Qumran. Joseph, a priest, and Mary, a nun, were wonderfully equipped to raise the prophesied Son of God. But to live a holy and perfect life, which was the requirement for the Son of God, would have been impossible without the intervention in the lives of Herod the Great, King of Israel, by the Almighty Himself. Jesus often spoke of himself even in the scriptures as the Son of Man because his duties in the Jewish mission often loomed so large and many they seemed impossible for him to surmount.

“Events in this book move and weave exactly into the events told in the New Testament because they are true.”

Published by Christian Faith Publishing, Bobbie Lou Collom Blumer’s new book comprehensively traces the origins of Jesus and his connection with God and his brethren that substantiates Christian doctrines and the Bible.

Readers will have their spiritual knowledge reinforced as they partake of this book’s retelling of the New Testament with supplemental historical facts.

View the synopsis of “Jesus and the Mystery of the Dead Sea” on YouTube.

Consumers can purchase “Jesus and the Mystery of the Dead Sea” at traditional brick-and-mortar bookstores or online at Amazon.com, Apple iTunes store, or Barnes and Noble.

For additional information or inquiries about “Jesus and the Mystery of the Dead Sea,” contact the Christian Faith Publishing media department at 866-554-0919.