ViSalus’ Worlds Largest Giving Day is December 14th, and The Tampa Bay Dream Team intends to give back by providing donations to families in need in New Port Richey, just in time for Christmas. 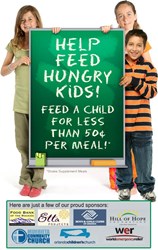 The Vi Community Challenge feeds kids for less than 50 cents per meal!

We need to give back to our local communities, to the people in need, especially during the holiday season, where so many families are struggling. - Melanie Milletics

The Dream Team, a group of Tampa Bay area promoters of the Body By Vi Challenge, are combining their efforts to help people in need on Saturday, December 14th, 2013, on the second annual “World’s Largest Giving Day.” Cause Captain, Melanie Milletics, is planning to benefit the Helping Hands Ministry, a food bank established and run by Calvary Chapel Worship Center, in New Port Richey.

ViSalus, the company behind the Body By Vi Challenge, has always had a culture of giving back to the community. “Giving back” is at the heart of everything Vi does as a company, and it is evidenced by Vi’s different promotions and outreaches, such as PROJECT 10 Kids, Vi Cares, the Vi Community Challenge, and providing food for natural disaster relief. And on Saturday, December 14th, the entire ViSalus community from the United States, Canada, and the United Kingdom will be participating in the World’s Largest Giving Day.

As Independent Promoters of the Challenge, the Dream Team shares the same culture of giving, whether it is offering nutritious food to children or families in need, or giving a helping hand or moment of hope. Melanie Milletics, who is also a Body By Vi Champion, believes that, “We need to give back to our local communities, to the people in need, especially during the holiday season, where so many families are struggling.”

How can you be a part of the World’s Largest Giving Day? Participate by giving your time, energy, and support to those in need. Donate to children and families in need through the Vi Community Challenge, in which ViSalus matches every donation. Collaborate with people in your community, and become a Cause Captain, to organize a Giving Party. Or join a Giving Party near you from Vi’s Giving Party List. We challenge you to make Saturday, December 14th, 2013 the World’s Largest Giving Day by making a difference and giving back to your community!

ViSalus Ambassador Melanie Milletics and the Dream Team are excited to be a part of this year’s World’s Largest Giving Day. Dream Team members from all over North America and the United Kingdom will be participating in their own way to a greater cause. If you are have a passion for helping people, and share our vision for a healthier planet for all who share it, then consider joining the Dream Team and making a difference in the world!

Vi-Cares donates to children and families in need.

Dream Team donations have thousands of meals to people in need through Vi Cares.

When an adult loses, the kids win with Project 10 Kids!