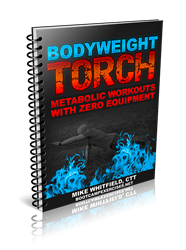 Part two includes one of my favorite bodyweight ab exercises called the ‘Around the World’, along with other bodyweight core exercises. I’m really excited to be sharing this information with the world. The two videos will be a great resource for bootcamp trainers, coaches, personal trainers, fitness enthusiasts and more. Whether someone is traveling or lacks a lot of time, the bodyweight exercise videos will be a great place to get fresh ideas without getting bored. After all, 105 bodyweight exercises is enough variety for even those with an advanced fitness level. This was a really fun project to put together to show anyone how to add variety to their bodyweight workouts and bodyweight training.”

The free 4 week bodyweight workout program is available for download at: http://www.bodyweighttorch.com