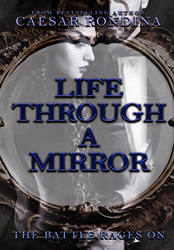 Life Through A Mirror - The Battle Rages On

Author Caesar Rondina explores murder, romance, and mystery in his story Life Through A Mirror. The book is filled with lots of twists and turns, so as the reader, you are constantly second-guessing and wondering. This makes the book hard to put down. I would definitely recommend it. Emerson Craig

As a journalist, when I noticed that the first in the Life Through A Mirror romantic murder mystery trilogy made the top 6 murder mystery books, I reached out to the author Caesar Rondina through his website. Caesar Rondina has five books being published in a short period. The first book in his murder mystery trilogy "Life Through A Mirror," was rated in the top 6 murder mystery books with great reviews by book reviewers. He followed that with a self-help book called "A Woman's Fear - Female Abuse," which is gaining global acclaim. The theme of this book is prevention and awareness. True stories are told by courageous women who have experienced abusive events, along with some true stories Caesar Rondina encountered in his 30-year career as a paramedic and firefighter in an inner-city caring for over 76,251 patients. When asked, Caesar Rondina stated, "Female and child abuse is a passionate topic for me. I have seen what no person should ever see, or no individual should ever experience. This book leads to a climatic and impactful ending. I volunteer as much as time allows to speak with those affected by these tragedies." When I read that book, I was astonished by the stories and facts that I had no idea existed.

Caesar Rondina announces that the second book in the Life Through A Mirror trilogy, "Life Through A Mirror - The Battle Rages On," will be released this month. Caesar Rondina stated, "Writing this trilogy was exciting. Very few writers write a murder mystery trilogy. Keeping a reader's attention across many books in a trilogy is difficult. I believe I solved that problem in this genre. The book reviews by the prestigious book reviewers were stellar. This made me believe I achieved my goal and overcame that challenge. The trick for me was to start the first book knowing how I wanted the third book to end. The lives of the two main characters, Allie and David, develop and move forward in each book, whereas, each book is a different murder mystery. I gave special attention to character development as additional characters were added to the plot. Each book ended with my readers having closure on the murder, but wondering what Allie and David would face next. The plot and characters twist and turn. Each time the reader thinks they figured out who the murderer is, they found out they were wrong. I read the reviews by the readers and book reviewers who write them. The theme for many was the same." "I never wanted to put it down.'"

I read the book, and I agree. I did not want to put it down. I also found I could not figure out the "whodunnit it" until Caesar Rondina led me to figure it out.

If that is not enough, the third book and conclusion in this romantic murder mystery trilogy, "Life Through A Mirror - When Murder Calls," will be released in May of this year. I asked Caesar Rondina if that will be the end of the series. Caesar Rondina stated, "The third book does give some closure, however, the ending is very tricky. If the series does well, I guess I can tease you a bit and say, if my readers want more, additional books can be written, however, no one will be disappointed." I read the first two books. While speaking with Caesar Rondina, I asked, "Why a fictional book seems so real.?" Caesar Rondina stated, "In my 30 plus years in pre-hospital medicine, I cared for over 76,251 patients. I have been a part of hundreds of crime scenes, and have testified in court on numerous occasions. Some which involved murder trials. I know the system, and how it works. The way crime scenes are investigated, and the equipment involved. If a book has a fictional theme, it does not mean it cannot be realistic. I believe that is what makes this trilogy so real. The theme of the stories have been modified, but are taken from actual cases I was a part of."

When I asked Caesar Rondina what was next, he explained, "The last book for 2019 is a love story titled, "When Two Worlds Collide." It is a story about two young people, Jill and Tony. They must face many obstacles to prove their love and be together. Although the story is modified, the idea for this storyline came from a call I was on many years ago. I finally had time to turn it into a book. I believe a multi-genre writer is at his their best when they write about something they experienced and modify it so that no references to the real people, times, dates, or locations, can be tied together." Although it is too early for the book to be in print, Caesar Rondina did provide me with the manuscript. This is a heartbreaking yet heartwarming love story. You will not be disappointed. However, have your tissues handy as you read it.

All of these books will be available as Audiobooks. Caesar Rondina is a client of Award-winning NYT/USAT Best Selling Author Narrator, Marnye Young, @audiosorceress. Caesar Rondina states, "Marnye's talented voice brings life to the characters in a way that only she can do. Working with her is a great collaboration between people, and now friends."
-Sunny G. - Journalist