What if the cows are small and weighing only eight pounds? 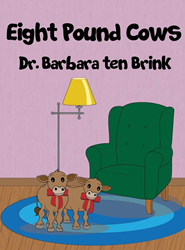 Wouldn’t it be fun to have pets that are not a handful to care for? Sure, the dogs and the cats are already fun. But imagine if cows are just as handy as these fur babies.

Generally, these thousand-pound creatures have different personalities. And it would have been amusing to discover these behaviors if they are not as large—say about just eight pounds. And that’s when and how the idea for a children’s story was born.

Eight Pound Cows is a story about cows that only weigh about eight pounds. And because they’re smaller and lighter, it would be easier to care for them, to feed them, to walk them as they graze. It would probably be exciting to teach them some tricks as cows are intelligent animals too.

The book is designed with full-color artwork to coax the artist in each of the readers. The author then suggests they provide their own sequel of her book Eight Pound Cows, writing about the adventures the readers would have with their own eight-pound cow pets, including the mischiefs they get into.

This book is available online and can be purchased at https://barbaratenbrinkbooks.com, http://www.dorrancepublishing.com and http://www.amazon.com.

About the Author
Dr. Barbara ten Brink is a retired science educator. Now that she has more time to pursue her other passion including painting, poetry, and loving nature—the first step was buying a twenty-acre ranch in Gruene, Texas. It has all the makings of a ranch: the fences, the cacti, the cows—the whole nine yards. But the cows—the cows are the pièces de résistance.

Dr. Barbara ten Brink is as passionate with arts as she is with science. With her new book, she is encouraging her readers, young and old, to boost their imagination and entertain their crazy ideas about what they could do if they have a wide-eyed, docile, eight-pound cows for pets. For her, she would take them on walks, give them baths, train them new tricks.