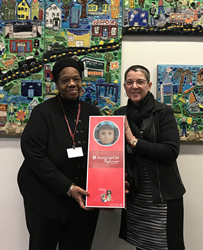 Madison, Wisconsin is the home of the original American Girl company and its founder, Pleasant Rowland. For the past 30 plus years, Madison Children’s Museums hosts and is a benefactor of the American Girl Benefit Sale. The museum restores and resells overstock and returned merchandise donated by American Girl/Mattel. The benefit sale serves as the children’s museum’s largest fundraiser and has raised a total of approximately $24 million. Funds raised from the sale are shared equally to support the exhibits and programs of Madison Children’s Museum and provide grants for charitable organizations serving children throughout Dane County via American Girl’s Fund for Children.

“While at last year’s Association of Children’s Museums Conference, Deb Gilpin, director of the Madison Children’s Museum and I had a conversation about their American Girl Doll sale and my involvement with junior doll collectors in Boston,” said Jeri Robinson. “This past June, I received an e-mail from Deb, stating they had received a large number of new Melody Ellison dolls and would be honored to provide a large number of these to the Museum and junior doll collectors. Literally. With the assistance of New England Blacks in Philanthropy (NEBIP) who generously funded shipping costs, the dolls arrived in early November to be distributed by Boston Children’s Museum.”

While some of the dolls will be donated to programs to support their holiday gift giving efforts, the majority of the dolls are being given to programs who will read and discuss the books in a variety of book club settings in schools, libraries, shelters, churches and community based organizations and participate in a variety of related program activities. In the spring, the Black Gold Doll Club and its junior collectors’ will host four teas or gatherings for the girls and their dolls to share what they have learned about Melody and Civil Rights and what they plan to do to make their community a better place to live. Boston Children’s Museum will also offer programming highlighting the story of the doll in the new calendar year.

The doll comes with her first book of three in the series: No Ordinary Sound. Set in Detroit during the Civil Rights Movement, "An American Girl Story - Melody 1964: Love Has to Win” examines the joyful life and troubled times of an irrepressible 10-year-old African-American girl whose vivid imagination and creativity reinforce her optimism. When shocking national events threaten her sense of security, Melody must find inner strength to restore her hope for a better world.

Although Melody’s story takes place in Detroit, there was a lot happening in Boston during the Civil Rights era. Information about Boston’s 1960s Civil Rights Movement can be found in the WGBH OpenVault: http://openvault.wgbh.org/exhibits/boston_civil_rights/article