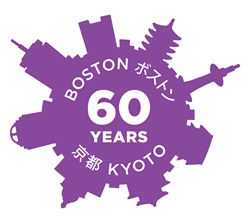 “Such an authentic and imaginative experience is important, especially for young people like our visitors who are constantly building their foundational skills in cultural competency and humanity, respecting each other and being responsible in the multicultural world today."

Although Boston and Kyoto are separated by 6,824 miles, they share an official "Sister City" designation. In recognition of Boston’s oldest sister-city relationship, Boston Children’s Museum is hosting a year-long celebration of the Boston-Kyoto 60th Anniversary with rich cultural events and public programming.

The Museum is home to the Japanese House (Kyo-no-Machiya), an authentic silk merchant’s house from Kyoto, Japan. This house was originally built in late 1800s, and it was transported to Boston as a generous gift from Kyoto to commemorate the 20th Anniversary of the Sister City Relationship in 1979. While it is the 60th anniversary for the sister cities, it is also the 40th anniversary for the Museum to have this special historic cultural house exhibition. Guided Visits of the Japanese House are available with limited hours.

“Being in this immersive space, you can experience what it is like to live or visit someone’s home in Kyoto. Such an authentic and imaginative experience is important, especially for young people like our visitors who are constantly building their foundational skills in cultural competency and humanity, respecting each other and being responsible in the multicultural world today. As they physically take off their shoes and step into this old house, they figuratively put themselves into someone else’s shoes by using their empathetic skills,” said Akemi Chayama, Japan Program Manager at the Museum.

The Boston-Kyoto relationship exemplifies the mission of promoting the value of global and cross/inter-group cultural learning. To promote the 60th anniversary the Museum created a special logo. Designed by Karin Hanson, Creative Director of the Museum, it was officially introduced to the public during the Boston-Kyoto Sister City 60th Anniversary Celebration Kick-off event, hosted by Mayor Walsh and Consul General Michii.

Special 60th anniversary celebration events and programs will include:

“Celebrate Tomodachi Friendship!” on Saturday, April 27 from 11:00am–4:00pm, which welcomes the Kyoto city delegation and citizen’s friendship team members. Tomodachi means friends in Japanese. Kyoto’s famous ceramic artist Imai-san will invite visitors to create animals out of clay together. The Friendship Ceremony will be held when Miss Kyoto, the Japanese friendship doll, originally arrived at the Museum in 1927, welcomes Mary-san, an American friendship doll living in Kyoto who is coming to visit. These two dolls are from the famous Friendship Doll Exchange, a project from the 1920s, in response to the tensions that developed between the two cultures as a result of the Immigration Act of 1924.

Ikebana – Japanese Flower Arrangement, with Special Guest Artists - Ikenobo Ikebana Society of Boston on Sunday, May 19. According to Ikenobo, “Ikebana is the Japanese traditional art of flower arranging.

90 Children from Kyoto, Japan on Friday, June 14 from 6:00-8:00pm
Elementary school friends from Kyoto are coming to Boston. The students have been preparing fun activities, toys, and games and cannot wait to share them!