Hollywood heavyweight, Patrick Kilpatrick, releases paperback version of his searing and scandalous literate look behind a successful career as the entertainment industry's go-to antagonist, and juicy unprecedented celebrity tales - all the while intricately weaving in brazen patriotism and unparalleled humor. 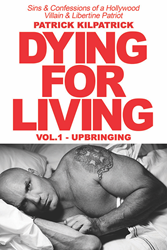 The paperback copy is now available

"One of only two people from whom I learned something about acting. Weare all lucky that Patrick Kilpatrick has chosen to share."- James Woods

Kilpatrick is a veteran of 170 films and hit TV shows as lead actor, screenwriter, director, producer - from Steven Spielberg's MINORITY REPORT with Tom Cruise to James Cameron's DARK ANGEL with Jessica Alba, LAST MAN STANDING with Bruce Willis, 24 with Kiefer Sutherland and everything - high to low - in between. I have also written for nearly every magazine in New York - LIFE to TIME, INTERVIEW to PLAYBOY - as well as a multitude of ad agencies. I've served as director/assistant director off and on Broadway and been a guest lecturer at Hampton-Sydney College, the University of Wisconsin and been an invited Masters Class instructor at the New York Film Academy.

Published by Boulevard Books (NYC) the scintillating memoir launched at The National Press Club and the Kennedy Performing Arts Center on Oct. 3rd. Kilpatrick made appearances on FOX and ABC in D.C. – links below and was the headliner at a Boulevard Books Writers’ Event at Barnes and Nobles Union Square in Manhattan on Nov. 17th.