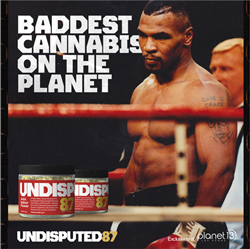 We are the only dispensary on the planet that has thousands of tourists and cannabis aficionados from all over the world visit daily, making Planet 13 the perfect place for any brand looking to create a national reputation.

The Undisputed 87 name is inspired by a historic milestone that represents excellence. On August 1, 1987, Mike Tyson defeated Tony Tucker in Las Vegas to become the Undisputed Heavyweight Boxing Champion of the world unifying the WBA, WBC, and IBF Heavyweight championship belts.

"Undisputed87 is an ode to the legacy Mike left not only in Vegas but in the world of fighting,” said Tyson Ranch CEO, Rob Hickman. “We knew there was no better place to launch this brand than the cannabis SuperStore that is Planet 13. We are extremely excited about this exclusive partnership and bringing Mike back to Vegas”

Planet 13 is the perfect venue to match the excitement and showmanship of this brand. Planet 13 is the world’s largest cannabis dispensary and entertainment SuperStore located just steps from the Las Vegas strip where Tyson had some of his biggest fights.

“We are the only dispensary on the planet that has thousands of tourists and cannabis aficionados from all over the world visit daily, making Planet 13 the perfect place for any brand looking to create a national reputation,” said David Farris, Planet 13 VP of Sales and Marketing. “We’ve been supporters of Mike Tyson for a long time. We launched Tyson Ranch as a SuperStore exclusive in March 2019 and it quickly became one of the top selling pre-rolls in Nevada . We are excited that Mike Tyson has chosen Planet 13 to launch Undisputed 87.”

"The Baddest Cannabis on The Planet is only available at Planet 13. Listen, you don't want to miss this!" said Mike Tyson, the founder of Tyson Ranch.

The Ranch Companies was founded by Mike Tyson and partner Rob Hickman. With a diversified portfolio, The Ranch Companies has built successful companies within hemp consumer packaged goods, cannabis packaging and branding, CBD processing, and in the world of entertainment. Learn more at tysonranch.com, hotboxinpodcast.com, and coppergel.com.

About Planet 13
Planet 13 (http://www.planet13holdings.com) is a vertically integrated cannabis company based in Nevada, with award-winning cultivation, production and dispensary operations in Las Vegas - the entertainment capital of the world. Planet 13’s mission is to build a recognizable global brand known for world-class dispensary operations and a creator of innovative cannabis products. Planet 13’s shares trade on the Canadian Stock Exchange (CSE) under the symbol PLTH and OTCQB under the symbol PLNHF.

The Company is indirectly involved in the manufacture, possession, use, sale and distribution of cannabis in the recreational and medicinal cannabis marketplace in the United States through its subsidiary MMDC. Local state laws where MMDC operates permit such activities however, these activities are currently illegal under United States federal law. Additional information regarding this and other risks and uncertainties relating to the Company's business are contained under the heading "Risk Factors" in the Company's annual information form dated October 18, 2018 filed on its issuer profile on SEDAR at http://www.sedar.com.
No stock exchange, securities commission or other regulatory authority has approved or disapproved the information contained herein.