Kallen was the inspiration for 2004 film ‘Against the Ropes’ 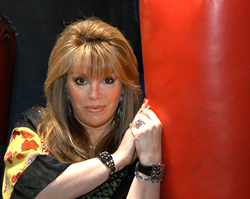 Jackie Kallen managed the careers of more than a half dozen champions. She also was the inspiration for the 2004 film "Against the Ropes," starring Meg Ryan as Kallen.

Bruce Merrin’s Celebrity Speakers Bureau has reached an agreement to represent Jackie Kallen, known as the First Lady of Boxing. A former journalist — who has interviewed everyone from Elvis Presley and Frank Sinatra to the Beatles and Michael Jackson — Kallen made her mark in the late ‘70s as a sports writer with a focus on boxing and became the most successful female manager in the sport’s history.

Kallen went on to manage fighters, guiding the careers of more than a half a dozen champions including James “Lights Out” Toney, Bronco McKart, Pinklon Thomas and Thomas “Boom Boom” Johnson. She was the inspiration for the 2004 film “Against the Ropes,” starring Meg Ryan as Kallen, and appeared as a regular on the NBC show “The Contender,” a reality show with Sylvester Stallone and Sugar Ray Leonard that aired from 2005 to 2009.

Kallen has won countless awards, was inducted into the World Boxing Hall of Fame and has written two successful books. She has been featured nationally on “The View,” NBC’s “Today,” “The Jon Stewart Show” and many other local talk shows around the country. In addition, she has been the subject of articles in The Wall Street Journal, The New York Times, the Los Angeles Times, Sports Illustrated, Good Housekeeping Magazine and many more.

An accomplished public speaker, Kallen has crossed the United States and Canada countless times, presenting her inspirational and motivational speech, “Roll with the Punches,” which focuses on self-confidence, fearlessness, taking the path less-traveled and making the most of every day. She has mentored many young people and is involved in bridging the gap between the community and law enforcement. She also addresses issues of health, and has not let four heart stents and diagnoses of glaucoma and melanoma dampen her boundless energy and positive outlook. Kallen is a mother, grandmother and an advocate for getting older without getting old.