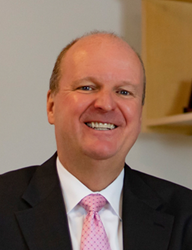 “It is my privilege to serve as board chair. As a survivor I feel I have been given a gift and this is my way of giving back,” said Tinlin.

Tinlin started working with the foundation following his own experience with a ruptured brain aneurysm in April 2017. In just two years, Tinlin has dedicated himself to the organization and has worked tirelessly to raise awareness and research funding.

“I am thrilled to have Tom succeed me as board chair. His personal and professional experience makes him a wonderful asset to the board. He understands firsthand the importance of continuing the foundation’s work nationally and across globe,” said Former Board Chair, and Founder and CEO of RL Leaders and Capstone National Partners John C. Rogers.

In 2018, Tinlin received BAF’s Survivor Champion Award for his work within the brain aneurysm community. This year he emceed the event helping to honor individuals, such as City of Boston Mayor Martin J. Walsh, for their efforts to raise awareness. Tinlin has also been instrumental in working with Massachusetts Governor Charlie Baker to formally recognize September as Brain Aneurysm Awareness in his home state.

“It is my privilege to serve as board chair. As a survivor I feel I have been given a gift and this is my way of giving back,” said Tinlin. “As I continue to work with BAF and the brain aneurysm community, my goal is to increase the general public’s and medical professionals’ understanding and education of the early warning signs that can easily be misdiagnosed. My hope is that the work that we do today will lead to early detection and successful treatment of brain aneurysms in the future.”

For the first time this year, Tinlin and his family organized the first annual “18 for 18” Tinlin Family Golf Tournament, which was the largest fundraiser in the foundation’s history. The tournament name represents a startling statistic; a brain aneurysm ruptures every 18 minutes. Of the 30,000 people each year that suffer a rupture, 40 percent will die, and of those who survive, 66 percent will endure permanent neurological deficits that limit their ability to resume a normal life. Despite how often a rupture occurs and how devasting the outcome, the federal government only spends .83 per person afflicted.

All the proceeds that Tinlin and his family raised supports BAF, of which $40,000, went to the Thomas J. Tinlin Chair of Research. This year he traveled to Pasadena, CA to award Dr. Steffen-Sebastian Bolz of the University of Toronto, the grant to support his research project.

“BAF is so grateful for all of the work that Tom, his family and his community have done to help elevate the level of awareness of brain aneurysms and raise critical research funds. Tom understands how important it is to have more people know what a brain aneurysm is and how to identify a potential rupture. Understanding the early warning signs and knowing the facts saves lives,” said BAF Executive Director Christine Buckley.

To learn more about brain aneurysm disease or to support the BAF, please visit bafound.org.

ABOUT THE BRAIN ANEURYSM FOUNDATION

Founded in Boston and now based in Hanover, Massachusetts, the Brain Aneurysm Foundation is the globally recognized leader in brain aneurysm awareness, education, support, advocacy and research funding.

The foundation’s mission is to provide information about and raise awareness of the symptoms and risk factors of brain aneurysms to prevent ruptures and subsequent death and disability; work with medical communities to provide support networks for patients and families; and advance research to improve patients’ outcomes and save lives.

Established in 1994, the foundation is led by Executive Director Christine Buckley and has a Medical Advisory Board that comprises more than 30 of the nation’s foremost aneurysm experts — neurologists, neurosurgeons, interventional neuroradiologists and other brain aneurysm specialists — from the country’s leading hospitals and universities.

For more information about the Brain Aneurysm Foundation, visit bafound.org.