An Ohio-born festival expands to Michigan, bringing the perfect “Antidote” for what music lovers in the area asked for as Travis Scott- in addition to worldwide sensations Zedd and Jon Bellion- headline first year Breakaway Grand Rapids. 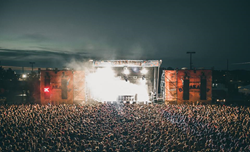 On August 25-26, 2017, festival attendees can break away to Grand Rapids for the two-day event which brings an eclectic lineup to the eco-urban environment of Belknap Park. The venue is conveniently located one mile from downtown and offers natural grass amphitheater hill seating plus panoramic views. In addition, Belknap Park is the largest outdoor concert venue in West Michigan and perfect for the future of this budding festival.

“We were looking for headlining acts to best represent the Breakaway Music Festival brand and all four do just that,” said Adam Lynn, managing partner of co-organizer Prime Social Group. “Breakaway is the perfect end-of-summer festival for lovers of all genres of music.”

Travis Scott, whose second studio album “Birds in the Trap Sing McKnight” was ranked one of the best rap albums of 2016 by Rolling Stone, takes the main stage alongside EDM power-producer Zedd (“Beautiful Now”, “Clarity”) and Jon Bellion (the eclectic singer-songwriter who has been certified Gold and Platinum multiple times).

The equal parts hip-hop, indie pop and electronic billing is rounded out by the brightest musicians in the industry and are as follows (in alphabetical order): 24 Hours, 3LAU, Blackbear, Bro Safari, Cheat Codes, Crankdat, Goldlink, (Michigan native) Quinn XCII, SuperDuperKyle and Two Friends. Additional headliner announcement will follow along with local support during Phase 2 announce. Details will be shared on all Breakaway Music Festival and Prime Social Group social media channels.

Breakaway Michigan is an expansion of Breakaway Music Festival, which was attended by 25,000 people in 2016. Grand Rapids “felt like a natural second city to host the unique Breakaway brand” according to Jenna Meyer, marketing director of festival co-organizer MiEntertainment Group.

Two-day GA tickets are on sale now for $60, two-day VIP for $110. For purchasing options, please visit http://www.breakawayfestival.com and follow @breakawayfest on social media while using the hashtag #BreakawayGrandRapids!

About Prime Social GroupGet an in-depth look at this up and coming Ohio based promotions and entertainment company.