Breanna Sinclairé Sings on W. Kamau Bell’s “United Shades of America”. Transgender Soprano To Be Heard May 30 on CNN 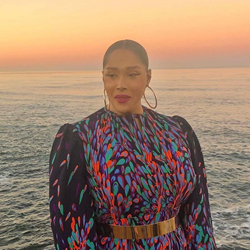 It’s a distinct honor to lend my voice to the work of W. Kamau Bell and 'United Shades of America.' -- Breanna Sinclairé

On Sunday May 30, operatic soprano Breanna Sinclairé (http://www.breannasinclaire.com) will be featured in an upcoming episode of W. Kamau Bell’s “United Shades of America” on CNN.

“It has been an honor working with Breanna,” said Morgan Fallon and Gillian Brown, the husband-and-wife team behind Zero Point Zero, producers for the show. “Everyone was incredibly moved during the filming as will be our television audience. It’s just beautiful.”

With a backdrop of the Pacific Ocean and a sunrise over San Diego, Sinclairé will be heard performing “The Star Spangled Banner.“ In 2015, Sinclairé became the first transgender singer to perform the National Anthem at a major league sporting event when she did so for the Oakland A’s. Since then, the artist’s career has taken off including coverage in the New York Times, NPR, and NowThis TV among others. Sinclairé has been heard in numerous performances and at major venues such as Disney Hall in Los Angeles and Davies Symphony Hall in San Francisco. Later this year, Sinclairé will make her operatic debut in the world premiere production “BOUND” being filmed for Toronto’s Against the Grain Theatre. On June 20, Sinclairé will perform a solo classical recital for San Francisco’s esteemed Old First Concerts. The event will mark one of the first live with-audience events in San Francisco since the onset of the COVID-19 Pandemic.

“It’s a distinct honor to lend my voice to the work of W. Kamau Bell,” said Sinclairé, herself a well-known activist for the Black and Transgender communities. “Perhaps more than any other show now on, ‘United Shades of America’ holds up a mirror to our country’s challenges and inequities but also offers a forum for dialogue and healing.”