Breffo Unveils the Gumstick™ Smartphone Stand for iPhone, Android, and HTC Devices Via the Kickstarter Platform 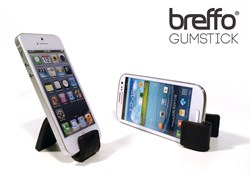 The GumStick™ is awesomely and deceptively simple to use, if feels perfect in your hand and entices you to play and mold it but can also slide into a bag the second you want to leave the coffee shop, plane, train or where ever your travels take you.

Gumstick™ was designed to be beautifully minimal, fully-functional and extremely simple to use. Breffo decided to introduce Gumstick™ on Kickstarter because backers tend to be innovators and early adopters.

"We saw a need for a simple smartphone stand that offered fluidity, but with great design in mind. The Breffo Gumstick is awesomely and deceptively simple to use," said Breffo CEO and Founder, Patrick Mathews. "It feels perfect in your hand and entices you to play, mould it and slide into a bag the second you want to leave the coffee shop, plane, train or where ever your travels take you. I hope Kickstarter backers see the quality, effort and dedication that has gone into this design as well as the functional value it represents."

Gumstick™ Delivers on Form and Function

Simplistic in design and function the Gumstick™ has the ability to be bent into any shape within seconds and will stay in position until bent into another shape. It’s flexible enough to be useful with absolutely any handheld device on the market; compatible with all "idevices", iPhone, Android, Samsung and HTC Smartphones. The body of the design when flat is a perfect rectangle - seamless and joint-free a perfectly smooth tactile piece, perfect in weight and balance. The Breffo Gumstick™ can be flattened within seconds to be placed into a bag or pocket for ultimate mobility.

"We saw the need for a simple stand that offered fluidity with great design in mind and refined the Gumstick™ until it embodied the level of product we want Breffo to be known for," said Dan Ashman, Vice President of Product Design.

Kickstarter gets product visions in front of potential backers to proof the idea within a representative market. Kickstarter campaigns offer a valuable source for funding initial development stages that are the most frequent product killers.

"We knew as a brand that we wanted to use Kickstarter as an avenue to launch Gumstick™ because those who follow the crowd funding site are part of our core demographic," said General Merchandise Manager US, Sara McMahon. "These are the early adopters. They appreciate innovation and they have their fingertips on the pulse of the marketplace. They’re knowledgeable enough to know when a product is great enough to support."    To view the project on Kickstarter click here.

Funds will help Breffo produce the product and get it ready for market while also providing the company the opportunity to receive considerable and candid feedback from the backers.

Established in the United Kingdom in 2009, Breffo launched its first product the Spiderpodium to huge acclaim. After identifying the market need for a cross functional and universal holder for the growing smartphone and hand-held gadget industry they went to work designing an accessory to accommodate multiple devices and thus, the Spiderpodium was born. Following its success, the ‘big brother’ Spiderpodium Tablet version quickly followed. Breffo continued its rapid growth globally and opened in the US as Breffo LLC in early 2010. All Breffo products are manufactured exclusively in the United Kingdom and shipped Worldwide. The Breffo range of products are now actively selling in 55 countries globally with its UK based creative team at the heart of all new product development.

Bedside Smartphone standTurn your smartphone into your alarm clock