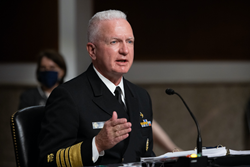 Gauss, a leader in computer vision in healthcare, today announced that former Assistant Secretary of Health and Admiral in the US Public Health Service, Brett P. Giroir, M.D., who previously served as the Trump administration's testing czar during the coronavirus pandemic, is joining the company as its Chief Medical Advisor.

Dr. Giroir joins Gauss as the company is pursuing Emergency Use Authorization (EUA) from the Food and Drug Administration (FDA) for its smartphone-powered, fully at-home COVID-19 rapid test. Upon authorization, the technology will improve Americans’ widespread access to testing, and enable anyone to test themselves within 15 minutes in the comfort of their home at substantially lower cost, enhanced convenience, and assured accuracy.

“Dr. Giroir joins us at a pivotal time as we work to bring our smartphone-enabled, rapid at-home test to Americans,” said Siddarth Satish, Founder and Chief Executive Officer of Gauss. “As a respected medical and public health leader who led the unprecedented scale-up of our nation’s testing infrastructure through the pandemic, Dr. Giroir knows better than anyone the transformational potential of next-generation diagnostic platforms. Dr. Giroir oversaw the scaling of COVID-19 testing from just 5,000 tests per day nationally to its peak of over 2 million tests per day in December, including the first uses of rapid point-of-care testing. That he has joined our team is a testament to his belief in the impact of both our AI-powered COVID-19 test and in our team’s long-term thesis on computer vision as a core technology in medicine.”

“Gauss’s smartphone-enabled COVID-19 test is the kind of innovation we need moving forward, to make testing scalable, affordable and widely-accessible to all Americans,” said Dr. Giroir. “We need to overcome the manufacturing complexities of lab-based molecular diagnostics, which do not scale. For this reason, point-of-care rapid testing, particularly over-the-counter and home-testing, will have significant market share moving forward. Gauss’s platform combines the immense processing power of smartphones with the inherent scalability of simple, rapid tests, without requiring specialized electronics or a test proctor via telemedicine.”

Dr. Giroir added, “Gauss as a company stands out because of its technology-forward vision and focus on being the ‘AI layer’ that can turn any smartphone into a high-performance diagnostic instrument. For several years, Gauss’s pioneering AI technology has helped clinicians diagnose blood loss in the operating room, and soon, it will help consumers perform a COVID-19 test using their own smartphones. With Gauss, I look forward to uniquely translating my experiences leading the nation’s COVID-19 testing response into cutting-edge innovation alongside an exceptional team of technology innovators and clinicians, and to have a continued impact on public health.”

Dr. Brett Giroir is a physician-scientist and innovator, whose career has been dedicated to improving public health and medicine. Most recently, he served as the 16th Assistant Secretary for Health in the U.S. Department of Health and Human Services, and as a four-star Admiral in the US Public Health Service Commissioned Corps. He also served as the US Representative to the Executive Board of the World Health Organization within the Department of State and was on the front lines of the COVID-19 response as a member of the White House Task Force and the national lead for testing and diagnostics. Previously, Dr. Giroir has served in numerous leadership positions in the federal government and in academia. Most notably, he served as Acting Commissioner of the US Food and Drug Administration (FDA) in 2019 and was the first physician to serve as an office director at the Defense Advanced Research Projects Agency (DARPA). His academic career included service as Professor and Executive Vice President and CEO of the Texas A&M Health Science Center, Vice Chancellor for the Texas A&M University System, and before that, tenured professor and holder of two endowed chairs at UT Southwestern Medical Center and Children’s Health in Dallas. Dr. Giroir has received numerous awards including the American Society of Nephrology Presidential Medal; the American Society of Hematology Outstanding Public Service Award; the Society of Federal Healthcare Professionals, Tip of the Spear Federal Healthcare Leadership Award; Remote Area Medical, Distinguished Service Award; the Society of Critical Care Medicine, Founders’ Special Recognition Award; the Executive Office of the President Office of National Drug Control Policy’s Director’s Distinguished Service Award; and the HHS Assistant Secretary for Preparedness and Response Pinnacle Award. His uniformed service decorations include the US Public Health Service Distinguished Service Medal with Gold Star Attachment, the Meritorious Service Medal, the Surgeon General’s Medallion, the Assistant Secretary for Preparedness and Response Pinnacle Medal, a Presidential Unit Citation, and the Secretary of Defense Medal for Outstanding Public Service, among other awards. Dr. Giroir received his A.B. degree in biology from Harvard University, magna cum laude, earned his M.D. from the University of Texas Southwestern and served his residency in pediatrics at Children's Medical Center Dallas and Parkland Memorial Hospital. He received his post-doctoral training at the Howard Hughes Medical Institute in Dallas.

About the Gauss COVID-19 test:

Gauss’s COVID-19 rapid antigen test is powered by an encrypted, HIPAA-compliant, easy-to-use smartphone app developed by Gauss’s team of clinical and technology leaders. The app guides patients to properly self-administer a nasal swab and perform the rapid antigen test. After 15 minutes, the app prompts the patient to scan their rapid test. The app uses patent-pending, artificial-intelligence-based technology to provide patients with their results in seconds, helping minimize reader variability. To fulfill legal reporting requirements, the consumer-friendly app seamlessly also shares the reliable, secure, and HIPAA-compliant results with appropriate public health agencies. According to results of a clinical trial in over 250 symptomatic and asymptomatic subjects, the testing solution demonstrated a 93% Positive Percent Agreement and 99% Negative Percent Agreement compared to a high-sensitivity, emergency-use-authorized molecular assay. For more information, visit covid19.gauss.com.

Gauss is a leader in computer vision for healthcare. Founded in 2011, Gauss’s mission is to digitally augment clinicians with software that radically improves diagnostic accuracy and leads to improved patient safety and clinical outcomes. Gauss’s flagship product, Triton, leverages computer vision on the iPhone to monitor surgical and obstetric bleeding in real time and notifies clinicians who can enact timely intervention and treatment for hemorrhage. Triton was granted De Novo clearance from the U.S. Food and Drug Administration (FDA) in 2014, as the first-ever computer vision software for surgical use and has been widely adopted by health systems across the United States. Gauss is a recipient of the Apple Design Award, which recognizes the best in design, innovation, and technology on Apple platforms. In September 2020, Gauss announced a partnership with Cellex, Inc. to develop one of the first rapid, at-home tests for COVID-19. Gauss is based in Menlo Park, CA and is backed by SoftBank Ventures, Promus Ventures, the Stanford-StartX Fund, and the strategic innovation arms of several US health systems. For more information, visit http://www.gauss.com.