World’s largest craft brewer, BrewDog, will remove twice as much carbon from the air as each team member emits 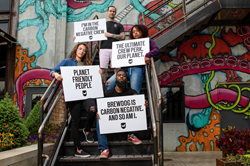 BrewDog, the world’s largest craft brewer, is the first employer in the world to ensure that all employees are carbon negative, just like the business itself.

COLUMBUS, Ohio – BrewDog, the world’s largest craft brewer, is announcing today that it is the first employer in the world to ensure that all employees are carbon negative, just like the business itself. The move comes as the brewer announced its carbon negative status in August, making it the first carbon negative international beer business.

BrewDog has introduced a planet-saving employee perk that allows all staff members to calculate their personal carbon footprint using the mobile app, Pawprint. BrewDog will then remove twice as much carbon from the air each year as the team member is responsible for. It will be able to double offset employees’ carbon footprints immediately with the help of the current carbon removal projects its funding and eventually with the BrewDog Forest, a 2,050 acre site in Scotland where the brewer will plant trees as a means to remove carbon from the air. More information about the interim offsetting initiatives and the BrewDog Forest can be found in BrewDog’s first sustainability report.

All employees will be able to start calculating their carbon footprints via the Pawprint app in the coming weeks. Employees will enter information about their lifestyle, including utilities, travel, food consumption and more, to calculate their carbon footprint. Once all employees submit their information, BrewDog will then calculate the total footprint of its 2,000-strong global crew and begin double offsetting it immediately by supporting the gold-standard carbon offset programs approved by its carbon consultant, Mike Berners-Lee.

BrewDog cofounder, James Watt commented:
“Our entire business is carbon negative and now our amazing people are too. This ensures that as a business, and as individuals, we all have a positive impact on our planet.”

BrewDog’s final round of its record-breaking crowdfunding program, Equity for Punks Tomorrow, is now open to investors as it announced on September 10. Every single penny of the money raised through Equity for Punks Tomorrow will be committed to cutting-edge sustainability projects including solar power, wind power, electric vehicle fleets, and converting waste into energy. All of these projects will help BrewDog reduce its carbon emissions and be more sustainable as a business, as it sets out to fight climate change and have a positive impact on the planet. For more information and to invest in BrewDog USA, visit EquityforPunksUSA.com.

About BrewDog:
Since 2007 BrewDog has been on a mission to make other people as passionate about great craft beer as we are. From the Headliner series, which includes bold, uncompromising pack leaders like the flagship Punk IPA, to the Amplified range (beer, but turned up to 11), BrewDog brews beer that blows people’s minds and has kick-started a revolution.

Co-founders James Watt and Martin Dickie shook up the business world in 2009 with the launch of pioneering crowdfunding initiative Equity for Punks, an initiative that has seen the company raise $97.5 million (£75m) over seven rounds, with their latest round, Equity for Punks Tomorrow, open until June 2021.

The funds and the community of Equity Punk shareholders (145,000) has enabled the Scottish craft brewery to scale up without selling out. With over 102 bars across the globe, export into 60 countries, and a brewery in Ohio that launched in 2017, BrewDog continues to take the craft beer revolution stratospheric, whilst continuing to push the boundaries, invest in people, put the beer first, and champion other small breweries in its venues.