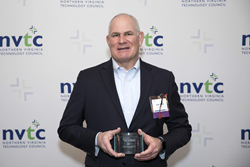 We are grateful to NVTC for this recognition and for all the hard work the organization does to facilitate innovation throughout the region.”

Bricata, Inc., a leading provider of comprehensive network protection, today announced it was named to the Northern Virginia Technology Council’s (NVTC) inaugural Tech 100. The NVTC Tech 100 recognizes businesses and business leaders who are driving technology innovation in the Greater Washington metropolitan region. A judging committee reviewed nominations and selected businesses and individuals who were recognized at an event held on December 3rd.

“Many thanks to the NVTC for establishing the Tech 100 program and continuing to champion the remarkable technology community we have in the region,” said Bricata CEO John Trauth. “We are grateful to NVTC for this recognition and for all the hard work the organization does to facilitate innovation throughout the region.”

The company has achieved a banner year in 2018 with milestones counting four significant product enhancements, earning the FIPS 140-2 validation for encryption, and signing new enterprise customers. The successes have not gone unnoticed as the company has continued to earn accolades from around the industry.

Earlier this year, CSO Online named Bricata to its list of best security software solutions based on an independent review of the product and more recently, Brilliance Security Magazine cited the company as a better mousetrap. Bricata has also previously been named a “vendor to watch” twice in the last three years by a technology analyst firm and the news organization, SDxCentral, described it as one of “10 Security Startups to Watch” at the end of 2017.

Bricata is a venture-backed company having secured an $8 million growth round led by Edison Partners last year. Its last round of funding included an investment and development agreement with In-Q-Tel, the strategic investor that accelerates the development and delivery of cutting-edge technologies to support the mission of the U.S. Intelligence Community.

About Bricata
Bricata is the leader in comprehensive network protection. The Bricata flagship solution provides unparalleled network visibility, full-spectrum threat detection, true threat hunting, and threat resolution capabilities in an intuitive, tightly-integrated and self-managing system. Its automated detection, productive GUIs, and expert system workflows make it easy-to-use for novices; while granular control of its engines, access to rich network metadata and PCAPs, and true threat hunting capabilities give experts the power and control they demand. Bricata has been proven to speed incident resolution by eight times by reliably detecting threats and providing the context necessary to get to the truth quickly and act. For more information visit http://www.bricata.com.

The Bricata dashboard provides a visualization of the data associated with a network security alert.