Flooding and mudslides continue as the known death toll risesand more than 1 million people are affected. 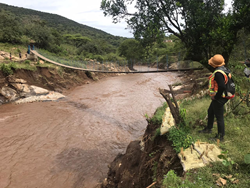 So many people are suffering, and our organization will continue to support affected families in any way we can.

The death toll in Kenya continues to rise in the wake of recent torrential rains and catastrophic flooding. Currently, 65 people have lost their lives, an estimated 1200 have been displaced, and more than 1 million people have been affected. Mudslides have been a primary concern and have accounted for at least 29 of the known deaths. According to Bridging the Gap Africa (BtGA) founder, Harmon Parker, the flooding and mudslides come on the heels of an earlier severe drought the left many reeling. The Weather Channel forecasts heavy rains to continue for four to six more weeks.

According to Interior Cabinet Secretary Fred Matiangi, 17 people died in a mudslide in the village of Takmal in the Pokot Central District, while 12 others lost their lives in mudslides in the villages of Parua and Tapach in Pokot South.

Government officials sent military and police helicopters to help those affected by the floods, and are assessing the full extent of the damage in concert with humanitarian aid workers. While rescue and recovery efforts remain the priority, there is great growing concern for the ongoing needs of the people in these areas. According to a statement released by Kenyan President Uhuru Kenyatta’s office, the rains, subsequent floods and mudslides have caused "massive destruction" to infrastructure like bridges and roads. The statement continued, “To those who were injured in the calamitous incident and are receiving treatment in different hospitals I pray for your quick recovery and restoration."

Bridging the Gap Africa founder Harmon Parker who has led efforts to build more than 60 bridges in the region over the past 20 years – many of which have been destroyed by the catastrophic floods and mudslides – responded to the disaster, saying in a statement: "The magnitude of these floods has devastated the region. So many people are suffering, and our organization will continue to support affected families in any way we can. We are here, on the ground, and well positioned to help rebuild and reconnect communities to the outside world.”

Parker, a recipient of a 2010 CNN Heroes award for his Kenyan bridge building efforts, reports that bridges are tremendously important and needed in this region so villagers in isolated communities can cross rivers and treacherous landscapes safely, quickly, and without danger. When there is a flood, they cannot get to schools, clinics or even the food market.

With the recent floods and relentless torrential rain, the country has seen mass displacement and villages buried under earth. These sorts of rains are uncommon in Kenya for this time of year. Experts have said the changing weather patterns have had a huge impact, because close to 100 percent of Kenya’s agriculture is rain-fed.

To learn more about Bridging the Gap Africa and how to help the people impacted by the flooding in Kenya, visit http://www.bridgingthegapafrica.org.