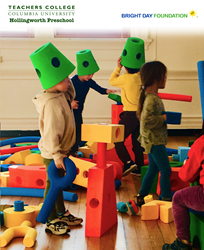 it is time to call for a revolution in preschool education, using the principles of play based learning as a foundation

It is 9:00 pm on Friday, January 24th and the production crew has wrapped up the final day of filming at Brooklyn Children's Museum in New York City. This completes phase one - three months of filming, two cities and three locations. Although exhausted, the production crew is pleased with their work and they have two months before traveling overseas for more.