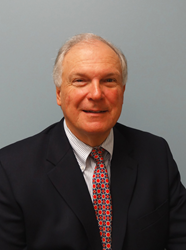 "I was drawn to Brightway’s proposition of owning an independent insurance agency, yet being able to focus on selling while my customers’ other needs are handled by the centralized service center," said Bob Miller.

An extensive background in insurance and the prominence of the Brightway Insurance brand throughout Northeast Florida led Bob Miller, CPCU, to open a store at 7440 US Highway 1 North, Suite 102 in St. Augustine.

The Euclid, Ohio, native graduated from the Ohio State University with a Bachelor of Science in marketing as well as insurance and risk. While there, he was a member of the Buckeye’s football team that played in a Rose Bowl.

In addition to being a licensed insurance agent for many years, Miller also holds his Chartered Property Casualty Underwriter (CPCU) designation, the highest professional designation for property and casualty agents.

He spent a number of years with Life of the South, American Bankers Insurance Group and Voyager Insurance, all in Jacksonville, Fla. With a wide range of insurance experience, Miller wanted to continue to sell in an industry he knew well.

“Everything connected,” said Miller, 62. “I was drawn to Brightway’s proposition of owning an independent insurance agency, yet being able to focus on selling while my customers’ other needs are handled by the centralized service center. I look forward to being a vibrant part of Northeast Florida, and focusing on Palencia, World Golf Village and Nocatee, where I live.”

Brightway Insurance is an independent agency with a franchise model that allows its network of owner-agents to focus on selling while service is handled centrally by product experts. Relationships with insurance companies are also handled centrally. A typical independent agent represents a little more than six insurance companies, while Brightway agents typically have access to more than 100.

Miller’s daughter, Cheryl, also a licensed insurance professional, is his business partner. She previously held key operational positions with Under Armour in Baltimore. Together, the father-daughter duo plans on adding up to four additional people to the office staff in the next 12 to 24 months.

With 108 locations throughout the U.S. today, Brightway has earned recognition from Entrepreneur Magazine as the No. 1 insurance franchise in the country (2013), from Inc. Magazine as one of the fastest growing privately held companies in the country (2008-2013) and from Franchise Business Review as a “Top 50 Franchise” (2012, 2013). Inc. Magazine also awarded Brightway its Hire Power Award, recognizing the company as one of the top 100 job creators in the U.S. in 2012 and 2013. For more information, visit http://www.brightway.com or call 888-254-5014.