Brigitte Macko’s newly released “Secrets, Lies, Spies and Those Who Were Left Behind” recounts the author’s gripping life after the Second World War.

“Secrets, Lies, Spies and Those Who Were Left Behind” from Christian Faith Publishing author Brigitte Macko is an emotionally driven autobiography of the author’s journey in life following the end of World War II. 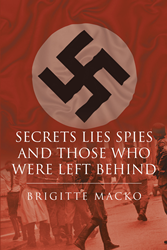 Macko shares, “When Ms. Macko watched the news about thousands of illegal immigrants entering the US from Mexico, she suddenly remembered something she had not thought about in over seventy years. After World War II, millions of people just walked into the country. Many were from Russia, Serbia, Croatia, Poland, Hungary, Czechoslovakia, and dozens of small countries that made up the East Bloc. The German government faced a huge ‘housing shortage.’ And what was the ‘resolution?’ Every German citizen had to report how many unused or vacant bedrooms they had.

“My playroom was assigned to an elderly lady from Hungary, my bedroom to an eighteen-year-old boy from Poland. The lady stayed until she died. She never made an effort to move out. She said, ‘I like it here.’ I was fourteen before I got to my bedroom back, my playroom never.

“How would all these people who live here, the ones that oppose President Trump and the border wall, if they had to give up their bedrooms, vacant vacation homes, etc.? How many vacant bedrooms does Nancy Pelosi have? Let her put her bedrooms and money where her mouth is.

Published by Christian Faith Publishing, Brigitte Macko’s new book shows the overwhelming transition the author had to undergo to adapt to the new norms of Germany following the country’s involvement in World War II.

This book shares the thought-provoking moments of a woman from Germany that paints an overview of what life had become after the devastating world war.

View the synopsis of “Secrets, Lies, Spies and Those Who Were Left Behind” on YouTube.

Consumers can purchase “Secrets, Lies, Spies and Those Who Were Left Behind” at traditional brick-and-mortar bookstores or online at Amazon.com, Apple iTunes store, or Barnes and Noble.

For additional information or inquiries about “Secrets, Lies, Spies and Those Who Were Left Behind,” contact the Christian Faith Publishing media department at 866-554-0919.