Bestselling Author, Omar L. Harris, and Award-Winning Screenwriter, Sameerah Luqmaan-Harris, announce that their 1-hour TV pilot teleplay “One Blood” (based on Omar’s novel “One Blood”) received the Fade In Awards Grand Prize this week for the TV Pilot/Web Series Competition. 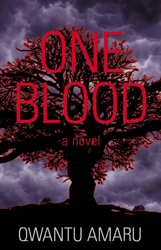 “We are extremely grateful to the awards committee at the Fade In Awards for this wonderful recognition. It is an honor to be in the company of other prestigious prize winners,” explained, “One Blood” Screenwriters Omar L. Harris and Sameerah Luqmaan-Harris.

Executive Producer, Creator, and Writer Jon Bokenkamp (Award-Winning TV Series “The BlackList”) calls his decision to enter the Fade In Awards, “The most important moment in my career.”

“We are extremely grateful to the awards committee at the Fade In Awards for this wonderful recognition. It is an honor to be in the company of other prestigious prize winners,” explained, “One Blood” Screenwriters Omar L. Harris and Sameerah Luqmaan-Harris.

“One Blood” the pilot is based on “One Blood” the novel by Qwantu Amaru (aka Omar L. Harris), which is an award-winning, bestselling fiction book with over 60,000 downloads, a Kirkus Reviews Book of the Year in 2012, and winner of 9 other prestigious literary awards.

The “One Blood” TV pilot teleplay Logline is: “A lifer at the Louisiana State Penitentiary gets a final chance at freedom -- all he has to do is assassinate the sitting Governor of Louisiana.”

The Amazon book description adds, “‘One Blood’ is a supernatural thriller that will make you an instant fan of this author. Rich themes of voodoo, family curses, political ambitions and a quest for power are dominant in this roller coaster ride set in Louisiana.”

The screenwriters spent part of their childhood in Lake Charles, Louisiana, and know the area well. Omar explains, “We moved to Louisiana when I was 11 and Sameerah was 9. The six years that I spent in this unique state from junior high through high school became the backbone of my first novel, “One Blood.” Omar adds; “I’ve always been an avid reader and Tolkein, C.S. Lewis, Isaac Asimov, and Ray Bradbury were some of my early favorites. Later on, I discovered Stephen King and never looked back! I’ve been fortunate to live all over the U.S. and overseas as well, and this diversity of experience certainly informs my work.”

The brother-sister duo adapted the novel over four months during the pandemic from August-November 2020. Their goal is to have “One Blood” turned into a TV series for a streaming service like: Netflix, Hulu, or HBO Max.

The Fade In Awards includes 9 competitions, and this Grand Prize Award is for the TV Pilot/Web Series Competition that “is open to aspiring TV writers of scripted one-hour, half-hour teleplays, limited series, mini-series and movies-of-the-week, and filmmakers of completed (filmed) web series. All genres are welcome.”

In the past, “Fade In Award winners have gone on to sign with major Hollywood talent agencies ICM, UTA, CAA, WME; write/direct hit feature films and television shows, including “The Marksman” (2020), “Your Honor”, “The Blacklist”, “Cold Pursuit” (2019), “Blades of Glory”, “Adam”, “Office Christmas Party”, and “If Only.” After Josh Gordon and Will Speck entered their short “Culture”, both signed with ICM. “Culture” was also nominated for an Academy Award™ for Best Short Film, Live Action, and these Directors/Writers then directed Will Ferrell in “Blades of Glory” and Jennifer Aniston in “The Switch”.

“One Blood” Teleplay is based on this NOVEL:

Award-Winning Screenwriter and Author Omar Luqmaan-Harris wins Fade In Awards Grand Prize with his sister Sameerah for their “One Blood” TV pilot teleplay based on his novel, "One Blood."

Award-Winning Screenwriter, Actor and Playwright Sameerah Luqmaan-Harris wins Fade In Awards Grand Prize with her brother Omar for their “One Blood” TV pilot teleplay based on his novel, "One Blood."

The Fade In Awards were established in 1996 to assist talented new writers and writer/directors with getting recognized within the Hollywood community.