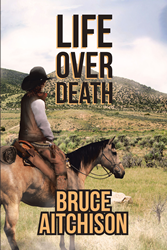 “Life over Death”: a stirring book that allows the readers to know why God uses life over death as His divine instrument because of human rebellion. “Life over Death” is the creation of published author Bruce Aitchison, a writer who enrolled in the Famous Writers School after his discharge from the Marine Corp. After retiring from America Airlines, he wrote his Western fiction novel titled Last Assignment, which received local success with constant requests for his next work.

Aitchison writes, “During the 1860s, Oregon and Santa Fe westward out of Independence Missouri were busy travel corridors providing seasonal business for wagon master, Clifford Stokes and his scout, Scott Buchanan. The wagon journey begins along the south fork of the Platte River where potential danger threatens from two unknown groups flanking the wagons while remaining hidden from view. One group is a Kiowa raiding party, the others are fleeing bank robbers in need of provisions. A traveling daughter bound for San Francisco becomes attracted to two men, a suave newspaper man where she is going, and a growing interest in the wagon scout in his element on the frontier. When tragedy strikes, a young worker on the wagon train studying for the ministry answers those difficult questions, why God uses life over death as His tool because of human rebellion.”

Published by Christian Faith Publishing, the author’s latest book is a plot-driven novel with characters who have different personalities which include social prejudices, a powerful magnet as the story unfolds.

This book is a captivating adventure ensnaring the reader’s attention, and as it unfolds, a young worker is able to provide the “why” answers during a crisis.

View a synopsis of “Life over Death” on YouTube.

Consumers can purchase “Life over Death” at traditional brick & mortar bookstores, or online at Amazon.com, Apple iTunes store, or Barnes and Noble.

For additional information or inquiries about “Life over Death,” contact the Christian Faith Publishing media department at 866-554-0919.