International KPOP Music Sensations BTS, Prepare to take the US By Storm, Videos Go Viral With Growth Over 1 MILLION Views Per Day

KPOP Artists, BTS Break into the US MUSIC Scene with six sold out ARENA SHOWS and two VIRAL VIDEOS. Band is Charting on Billboard Charts Across the Board 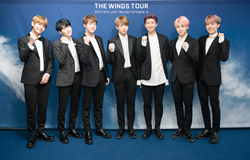 "BTS Videos...are the most viewed videos in a 24 hour period."

International K-pop sensation, BTS, are ready to make their mark as they prepare to hit the US in just over 2 weeks. The band are in the midst of making a huge impact on our shores including their upcoming sold out arena shows in NY, CHICAGO and LA.

BTS is causing a unstoppable wave of interest here by entering the music charts with high impact competing with artists such as Lana Del Ray, Ed Sheeran, and more. What makes this remarkable is that the KPOP band sings in Korean which hasn’t stopped US fans from taking notice. They have also been nominated in the category of “BEST INFLUENCER” for this year’s Shorty Awards, winner to be announced in NYC on April 23, 2017.

The band released two videos in the last 26 days: The first is “Spring Day” released on February 12 to worldwide eyes and views are now at 48 million and counting. The second video, entitled, “Not Today” launched on February 19, leading the iTunes Music Video Chart at #1 for 3 consecutive days. Views as of this writing: almost 45 million and counting. Both videos have seen rapid and unprecedented growth since release with combined views of almost 92 million people.

Billboard’s KPOP writer, Tamar Herman, wrote:
“On Tuesday (Feb. 28), YouTube Music revealed that the video for BTS’ “Not Today”-- uploaded to the streaming platform on Feb. 19 -- is now the most-viewed video in a 24-hour period to debut on the YouTube Top 100 Chart in 2017, outpacing music videos from every other genre worldwide since January. ... “Not Today” is also the most-viewed Korean track in a 24-hour span to appear on the chart since its debut in February 2016.”
http://www.billboard.com/articles/columns/k-town/7709030/bts-twice-speed-past-youtubes-k-pop-view-records

In other charts, BTS leads the Billboard Social 50 Chart at #1 for the past 6 weeks in a row, above highly respected American artists such as Ariana Grande, Ed Sheeran, Miley Cyrus, Beyonce, and more.

BTS has also just recently announced their participation at KCON in Mexico this year just before they come to the US. Their appearance at the Prudential Center in Newark, NJ will be just the beginning of the American onslaught of this Korean band.

As BTS prepares to hit our shores, they will be available for interviews, limited TV performance, photoshoots and social media takeovers.