When theorist and Build n Blaze founder Radia Funna brought xHuman, her theory of human and machine co-evolution to the United Nations General Assembly last year, it was to invite the youth and marginalized communities to this preeminent gathering. COVID-19 has changed the method but the march continues. 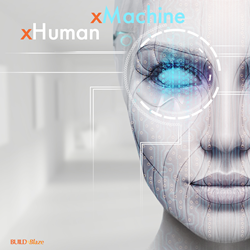 “2020 has been a difficult year. The world is facing a once-in-a-lifetime pandemic that has revealed just how far we haven’t come, from healthcare to equality. Our programming during UN General Assembly is meant to inform as well as to inspire us to action.”—Radia Funna, founder, Build n Blaze

So what is xHuman? xHuman is a theory of human and machine co-evolution developed in 2017 by theorist and Build n Blaze founder, Radia Funna. Funna theorizes that a series of important moments “…have stacked on top of one another over space and time to convert our singularly physical existence to an existence of duality—in both physical and digital forms—leading to the rise of the humans whose relationship with machines is so transformational that I have coined them the Exponential Humans or xHuman.” (Funna, The Theory of the Exponential Human: Can 4ir Usher in a Gender-Neutral Economy?)

Why bring the xHuman to the UN General Assembly? Funna’s time at the UN convinced her that the UN administered Sustainable Development Goals (SDGs) may be humanity’s best chance of solving our most persistent challenges, from the devastation of war to our current climate crisis. Yet, an ever growing generational and communications gap threatened its relevance to the very stakeholders needed to make it a reality.

How does "The xHuman @ the UN General Assembly" help?

“With all its pitfalls, and there are many, I still believe in the power of social media to democratize knowledge. Bringing my theory of human and machine co-evolution to the UN via social streaming was a one year experiment both to change the perspective of leaders and to bring in the voices of the global public. Watching the devastation of COVID-19 and the critical role social media continues to play in providing information and fueling disinformation; we are convinced that now is not the time to be silent. This perspective is important. This experiment must go on.”—Radia Funna, founder, Build n Blaze

About Build n Blaze
Build n Blaze, LLC. is an organizational strategy firm dedicated to providing our clients with data-driven and evidence-based approaches to navigate disruptions (such as technologies of the fourth industrial revolution and socioeconomic shifts) and an ecosystem to achieve transformation. We have a long-term commitment to the future of work, education and parity as well as to the United Nations’ administered Sustainable Development Goals (SDGs) for a better world. Based in the Greater New York City Area, our work leverages theories by our founder, the futurist Radia Funna, including her theory of the "Exponential Human” or "xHuman". https://www.buildnblaze.com/ #xHuman #xMachine #17at17