On the 20th anniversary of September 11 comes Bulletproof Wings, a new documentary depicting the American rock band Edisun performing on some of the most remote US military bases in Iraq and Afghanistan in 2005 and 2006. Culled from 200 hours of source footage collected during the tour, the film offers a unique glimpse into the lives of American soldiers in a war zone, as well as the lives of the four young musicians of Edisun, facing an uncertain and often terrifying reality of their situation. 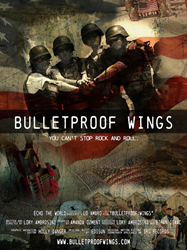 Reality hit us when we were flying into the northernmost region of Iraq, doors open on the Black Hawks... putting on helmets and body armor was not something we were used to doing.

Ethan Isaac of Ridgefield, CT, was walking on Horatio Street in lower Manhattan on the fateful morning of September 11, 2001, when the World Trade Center was toppled in a terrorist attack. Fighting his way through the soot and ash to escape the terror, he made his way out of Manhattan to the Catskill Mountains. “I was scared of what this meant for the future of the country and the world,” said Isaac.

He channeled his memories of that day into an original song called "Into the Sunlight,” a song that would find its way to the ears of Armed Forces Entertainment. So began the journey that would take Isaac and his rock band Edisun to more than 20 countries, performing for United States military men and women.

His experience traveling to the heart of a war zone to boost the morale of US troops stationed on the front lines in Afghanistan and Iraq is the subject of the new documentary film, Bulletproof Wings. The documentary is being released exclusively by TUBI TV on September 11, 2021, the 20th anniversary of where the story first began. Watch Here

Their experience participating in a military experiment to bring live music to some of the most dangerous venues on earth would change their lives forever. For the members of Edisun, it was their first real tour as a band. For one musician, it would be his last.

Directed by Lory Ambrosini of Lo Ambro Films, and produced by Amanda Ozment of Factory Underground Studio, the film consists of source footage collected by the band over the course of two tours in 2005 and 2006. As such, the film has a gritty, “behind the scenes” feel, offering an insightful look at military life in a war zone, as seen through the eyes of the young musicians and the troops they met while on tour. It also shows a remote and desolate part of the world that few Americans outside of the military have ever seen.

In certain respects, Bulletproof Wings is a travel film, as you join the band flying into the war zone in a C-130 airplane, experiencing what is referred to as a "combat landing,” shuttling between bases in Black Hawk helicopters (doors open, machine guns at the ready), harrowing ground convoys through desert sandstorms, all the while being coached by soldiers on the practicalities of living in a combat zone, such as when to wear their Kevlar helmets and body armor, and what to do during a rocket attack.

“Reality hit us when we were flying from Kuwait to the northernmost part of Iraq. We were moving from base to base in a helicopter, doors open on a Black Hawk,” said Isaac, in an interview with ABC World News Tonight, which covered their tour.

“Flying in a helicopter, putting on body armor was not something we were used to doing,” said guitarist Jonathan Svec.

There are lighthearted moments in the film, such as when the young musicians discover one of the gold toilets in one of Saddam Hussein’s former palaces, where they were housed in Baghdad on their first tour, only yards away from where Hussein himself was still jailed at the time.

Then there are heavier, almost surreal, moments such as an impromptu interview with an Afghan soldier whose family was killed by the Taliban, and who seemed to know just where Osama Bin Laden was hiding. As it was later revealed, the soldier was right.

At times, lead singer Ethan Isaac becomes the interviewer, turning the camera and microphone on American soldiers who offer candid reflections and insights into their personal lives, their missions, the dangers they face, and their incredible sense of duty. “I was just trying to understand what the soldiers were going through. It seemed to really boost morale that someone from home wanted them to share their experiences,” recalls Isaac.

Yet in the context of these strange and occasionally terrifying circumstances, the film is just as much the story of a young rock band on tour. Viewers see Edisun performing up close and personal for soldiers in full camouflage, talking with fans rocking out to the band's original music (with an occasional rendition of AC DC’s classic "Highway to Hell").

“One troop individual held my hands, and he wouldn’t let go. He said “Thank you so much, you have no idea how important this is,” said Svec.

“I'm deeply proud of what Edisun accomplished during these tours, and I’m thankful for these experiences we shared as a band. Getting to know the soldiers, and seeing first-hand what they went through, their service and sacrifice, made me proud to be an American,” said Isaac.

One serviceman who they got to know well during these tours is retired United States Air Force Major General Darryl W. Burke, former Commander of El Dhafra Airfield in the United Arab Emirate.

"As Commander of the 380th Air Expeditionary Wing in Southwest Asia, the mission and taking care of my Airmen were always my top priorities. I felt very confident that we would get the mission done, but keeping an Airman's morale high under austere conditions could be more difficult. I was fortunate to have Edisun visit twice during my tenure as Commander. Not only were their performances high energy and outstanding, but they assimilated into the unit; they were housed with our Airmen, ate in our dining facilities, and spent time on the airfield, in the squadrons and around the base. They gave everything they had," said Burke.

Ethan Isaac of Edisun with Afghani ChildrenPhoto taken near Kabul

Preparing to Deploy to IraqEdisun in Kuwait