Bad Dudes vs. DragonNinja, Karate Champ Player vs Player and other Data East titles will soon join BurgerTime on iiRcade 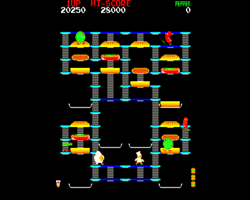 BurgerTime is an iconic arcade game that we’ve been getting a lot of requests for. The iiRcade community will be very excited about this new addition.

iiRcade Inc., the ultimate connected arcade machine that allows gamers of all ages to play their favorite retro and modern games in arcade style at home, is pleased to announce that BurgerTime, initially developed by Data East and officially licensed by G-MODE Corporation, is now available in the iiRcade Store.

Released in 1982, BurgerTime has players play as chef Peter Pepper, who must walk over hamburger ingredients located across a maze of platforms while avoiding pursuing characters.

The arcade version of BurgerTime will join Super BurgerTime and Peter Pepper’s Ice Cream, also officially licensed by G-MODE Corporation that launched earlier this year in the iiRcade Store, to complete the series.

“We’d like to thank G-MODE Corporation once again for continuing to add amazing Data East titles to iiRcade,” said Jong Shin, founder & CEO of iiRcade. “BurgerTime is an iconic arcade game that we’ve been getting a lot of requests for. The iiRcade community will be very excited about this new addition.”

More information on the six other Data East titles coming to iiRcade, which will all be arcade versions of the games:

Bad Dudes vs. DragonNinja - This 1988 arcade game, often referred to as ‘Bad Dudes’ in North America and known as ‘Dragon Ninja’ in Japan, is a side-scrolling beat 'em up where players are tasked with rescuing "President Ronnie" from ninja kidnappers.

Bloody Wolf - Run and gun arcade game that was released in 1988 has players play as Snake and Eagle, two commandos of the Bloody Wolf special forces, who must destroy the enemy's weapon base and rescue allies as well as the President.

Boogie Wings - A 1992 horizontally scrolling shooter that’s set around the time of World War I, where players maneuver biplanes, automobiles, animals, and various other unidentifiable objects to battle an army of mech-wielding scientists.

Heavy Barrel - A 1987 overhead run and gun arcade game where players must infiltrate a nuclear missile base that has been seized by terrorist and kill the enemy leader.

All games are officially licensed and available at affordable prices, and new titles are continuously added to the growing iiRcade store library. The iiRcade Store can be accessed on phones or via browser on PC or Mac through the iiRcade Store link.