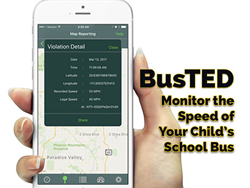 No rational parent would send their child off to school in a vehicle with a complete stranger and just hope that they will drive responsibly and safely. Yet that happens millions of times a day, each school day, all across America.

26 million children in the USA alone get onto the school bus according to schoolbusfacts.com. In 2016, 6 children died in a tragic accident in Chattanooga, Tennessee which captured headlines and shocked the nation. The truth is, 135 fatalities are reported every year in school transportation related incidents (data by crashstats.nhtsa.dot.gov).

School boards and districts recognize this problem. Some have attempted to address it through the installation of expensive GPS systems. Others are considering a range of options including legislation that would require school buses to display a ‘How is my driving?’ sticker on the back.

In the vast majority of cases however, there is no solution. Parents have no recourse, and no way of knowing whether their school bus driver is a responsible, sober-minded individual or an erratic, troubled person with a history of speeding as was - according to multiple news reports - allegedly the case with the Chattanooga bus driver.

Fortunately, it seems things are about to change. A company based in Scottsdale, AZ has developed a clever phone app that will alert parents when their child’s school bus exceeds the speed limit. The app – aptly named BusTED – has been successfully developed and tested on iPhone devices.

The company is launching a Kickstarter project seeking crowdfunding to complete their development for Android devices, complete their data integration, finalize their website reporting features and to raise awareness of the app among parents across the nation.

“We’re leveraging the power of Google’s Advanced Maps functionality and the fact that most children today already carry a sophisticated device capable of tracking speed – their smartphone”, says Al Sharpe, CEO of 3G International Supplies LLC who developed the app.

“We can compare actual speed with posted speed limits and accurately report violations. These reports are generated anonymously and automatically logged in our database, sent to the parents and optionally sent to the school. This allows us to monitor a pattern of behavior which can be used to identify drivers that are clearly violating speed limits on a regular basis”, he adds.

Possibly the biggest advantage to the app is the fact that it requires no investment from the school or district. Parents can simply download and install the app, and receive daily reports to show them whether any speed violations were recorded.

“We believe this is a prime example of the private sector developing a simple, effective solution to a real problem that affects millions of parents across America”, Mr. Sharpe concludes.

The company is offering free updates on development progress and availability of their app. Anyone interested can obtain more information and subscribe through their website at https://bustedapp.io.