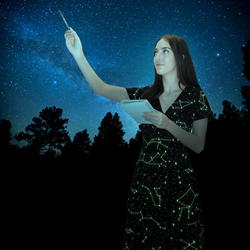 Svaha’s trendsetting designs are empowering women and girls to show their love of all things STEAM in their everyday fashions and lifestyles - proof that brainy IS beautiful!

At Svaha, We are starting a revolution aimed at shattering gender stereotypes!

In an age of female scientists, fighter pilots, physicists and astronauts, it’s hard to believe that it’s almost impossible to find clothing for girl's who love to do science experiments or stylish women’s apparel with space themes or dresses that feature science, math or technology designs. Thankfully, that is all now changing due to an innovative and trend setting new company called Svaha.

Svaha is a leading-edge online STEAM (Science, Technology, Engineering, Art and Math) themed clothing and accessories brand who’s online store at http://www.svahausa.com is changing the face of women’s and children’s apparel. They are confronting gender stereotypes with bright, fun clothes to allow kids’ imaginations to soar and creating original and unique dresses to prove that women who love Science & Technology can still be feminine & stylish! Svaha’s high-quality 100% organic, super soft dresses (available in all sizes) have a hint of geek, feature pockets and their designs unapologetically celebrate femininity and the awesomeness of women in STEAM. Each style of dress is named after famous female scientists such as Marie Curie, Rosalind Franklin, Ada Lovelace, Ruby Payne-Scott and Dorothy Hodgkin. But that’s not all – Svaha also celebrates women in all fields such as the release in mid-March of the first-ever special Supreme Court Justice Ruth Bader Ginsburg dress – already creating a buzz.

Svaha’s beginning is a humble one. It’s Founder, Jaya Iyer, has truly lived the American dream. Originally from India, she moved to the US carrying nothing but a backpack of her belongings along with a mountain of ambition and a desire to create something special. After obtaining a Ph.D. in Fashion Merchandising from Iowa State University, she taught Fashion buying and wrote a textbook on Fashion in Emerging Markets which, today, is widely used in universities. Her background includes working in apparel manufacturing and exporting and as the former apparel buyer for the cult-favorite store, ThinkGeek.

In 2015, she found herself in a predicament. Her daughter (whom the company is named after) was certifiably star-crazed and space-obsessed. Her dream was to be an astronaut, but Jaya could not find a single girl’s astronaut shirt, or for that matter, any science or technology-themed clothes for girls. As an apparel industry professional, Jaya wanted to encourage her daughter’s passion (and other girls with similar interests) in the best way she knew how – with clothes! She realized there was a missed market for kids who like things that aren’t “gender traditional”. So, she decided to use her industry expertise to create a line of products aimed at changing the landscape of the children’s apparel industry. Svaha developed its first line of products and received funding by launching a wildly successful Kickstarter campaign that raised over $30K.

The success of the company showed Jaya that other parents must be just as frustrated as she was with the increasingly gender-stereotypical children’s apparel industry. Once Svaha grew in popularity, Jaya started getting flooded with requests from women who wanted Svaha to use their unique design style to produce clothes for adults. She decided that women should not have to choose between loving Science, Technology, Engineering, Art, & Math and being feminine. From this, STEAM Angels: Smart Dresses for Smart Women was born. She turned to Kickstarter yet again, and this time raised over $57K to produce their exclusive line of women's apparel.

Today, Svaha’s trendsetting designs are gaining steam all over the world and empowering women and girls to show their love of all things STEAM in their everyday fashions and lifestyles - proof that brainy IS beautiful.

Science is awesome and this Chemistry Lab Rosalind Dress from Svaha is a lab full of fun! Proof that brainy is beautiful! Find it at www.svahausa.com.

Being a bookworm is in style! This Book Spines Ada Dress is perfect for geeky teachers and is only one of many different literary designs that can be found on Svaha’s website at www.svahausa.com.

Svaha’s STEAM-themed fashions include this stunning Moon & Stars Glow-In-The-Dark A-Line skirt that has pockets. If you’re over the moon with lunar awe, this is the out-of-this-world design for you!

Reach for the stars in this elegant, glowing celestial Katherine dress from Svaha. This dress is an homage to Cartographer of the Universe, Margaret Geller. Available at www.svahausa.com.

To the moon we go! Celebrate the life of the great NASA mathematician Katherine Johnson who helped launch the first men into space with this colorful raglan top available at www.svahausa.com.

Caffeine awesomeness without the jitters! This Caffeine Molecule Burnout Cardigan is designed to celebrate the awesome little alkaloid that puts pep in our step each morning!

Svaha Founder Jaya Iyer, center, created the company when she couldn’t find her daughter, who is space-obsessed, a single girl’s astronaut shirt or any science or technology-themed clothes for girls.

This Yuri’s night t-shirt from Svaha celebrates the anniversary of the first man in space, Cosmonaut Yuri Gagarin, April 12th, 1961. Available at www.svahausa.com.

This Svaha black, short-sleeve unisex adult t-shirt features a witty astronomy-inspired design called “We will be there” showing that in a few billions years, we might be on a new Earth-like planet.

Svaha’s mission is to celebrate women in all fields as well as STEAM. Being released this month is a special Supreme Court Justice Ruth Bader Ginsburg dress which will be available at www.svahausa.com.

Svaha offers all kinds of fun STEAM-themed leggings for work or play. Everything from a chemistry lab design to a Librarian’s Secret Chamber, Atomic Stained Glass Window, Typewriter Keys and more!

This fun and stylish Octopi Stainless Steel Necklace is armed, fabulous and ready for your next night out. This and other amazing STEAM-themed jewelry is available at www.svahausa.com.

Svaha has so many fun and wonderful dresses for kids – adorable designs that spark their love for all things STEAM! Check out all the kids’ designs at www.svahausa.com.