Caalco Distributors Corp. NEW Russian Vodka Brands in Canada. The Famous SIBERIAN Vodka Has Been Added to the List

Two Canadian alcohol companies Caalco Distributors Corp. and North Spirit Distillery Inc. have agreed to jointly launch a number of famous Russian vodka brands onto the Ontario market. The first of them will be Siberian vodka. 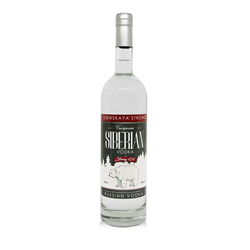 In Toronto, a strategic partnership agreement was reached between Ontarian companies: Caalco Distributors Corp. and North Spirit Distillery Inc. The subject of the Agreement is to combine the intellectual, financial, marketing, and production potential of both companies to bring well-known Russian and other promising vodka brands to the Canadian market. The first step will be the production and distribution of the famous in the former USSR vodka Siberian.

The first batch of vodka under the Siberian brand is produced in the version of Siberian Strong-45% in 200 ml and 750 ml bottles, which will be available to customers in Ontario before New Year. It is available now at North Spirit Distillery's in-house retail store at 2300 Finch Avenue West, Unit # 66, Toronto, Ontario, Canada, and can be ordered from the online store. The agreement also provides for the expansion of the line of vodka brands in 2021 to at least four out of more than a dozen brands listed in the portfolio of Caalco Distributors Corp. in order to ensure the capacity utilization of North Spirit Distillery in the amount of at least 11,000 decaliters.

About companies
Caalco Distributors Corp was founded in 2015 by a Canadian entrepreneur of Russian descent Yuri Baranov, who in 1998 was the first in Canada to import an alcoholic drink from the countries of the former USSR. Caalco operates under licensing agreements or owns vodka brands, some of which are in the world's TOP sales outside of Canada. Among them are PSHENICHNAYA, KREMLIN, PUTINKA, KRISTALL, MATRYOSHKA, PERVAK, BULBASH, WHITE RUSSIA and others.

North Spirit Distillery Inc. is a craft distillery founded in 2017 by Canadians of Russian descent Serguei Koulioukine and Aleksey Koscheev. The company has its own unique technology for the production and filtration of alcohol. During the production of vodka, ecologically pure water from the famous Ontarian spring Elmvale, which is located 100 km from Toronto, is used.

About SIBERIAN
The history of Siberian vodka dates back to 1976 when outstanding Soviet technologists developed its original recipe. It immediately stood on par with such well-known Russian brands as Stolichnaya, Moskovskaya, and Pshenichnaya. According to the results of 1977, the volume of sales of Siberian only on the domestic market of the USSR amounted to more than 600 million liters A distinctive feature of this vodka is its mild taste even in the version Siberian Strong - 45%.