Reggie Calloway, Director of Music Royalty Funding for Sound Royalties and music industry creative legend, has been nominated for a Board of Directors position on the prestigious California Copyright Conference. Calloway’s impressive career has included five Grammy nominations, numerous hit songs, and now he is paving the way for future artists by providing customized financing to help monetize their royalty assets – a veritable game-changer for the music industry. 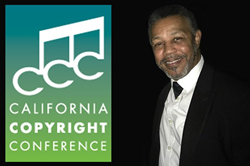 It’s an honor to be considered as a candidate for the California Copyright Conference’s Board of Directors, especially given my life’s journey as a creator, and the extraordinary efforts I’ve devoted to fighting for the rights of all music professionals.

Sound Royalties, LLC is thrilled to announce that its Director of Music Royalty Funding Reggie Calloway has been nominated as a candidate to become a member of the California Copyright Conference’s (CCC) prestigious Board of Directors. Calloway is a longtime music industry trailblazer, having founded the popular Techno-funk band “Midnight Star,” and as a five-time Grammy nominee, including a nomination for R&B Songwriter of the Year for his 1987 hit song “Casanova.”

Elections for the CCC’s Board of Directors are now open and will close on the evening of May 9, at an affair and panel discussion in Los Angeles with members of Earth, Wind and Fire. Sound Royalties is proud to be a sponsor of the special event. Members of CCC are eligible to vote for seven candidates, including Sound Royalties’ very own Reggie Calloway, to fulfill a two-year term.

“It’s an honor to be considered as a candidate for the California Copyright Conference’s Board of Directors, especially given my life’s journey as a creator, and the extraordinary efforts I’ve devoted to fighting for the rights of all music professionals,” said Calloway. “With my newfound passion for business and funding, I have partnered with Sound Royalties to offer freedom and innovative options in an ever-growing and evolving entertainment industry.”

With his keen sense for music, industry trends and business, Reggie Calloway began providing financing to artists and publishers who needed a way to monetize their royalty assets in 2011. Calloway was at the helm of a sales team that was instrumental in bringing to market thousands of song titles including the music of highly acclaimed artists including Whitney Houston, 50 Cent, John Legend, Will Smith, 3 Doors Down, Lil Wayne, Justin Timberlake, Timbaland, Earth Wind and Fire and Travis Tritt.

Today, as Director of Music Royalty Funding at Sound Royalties, Calloway helps lead the innovative company that is transforming the way music professionals fund their creativity. By offering fast, non-credit based royalty advances that allow creatives to retain the rights to their music, Sound Royalties is rapidly making a name for itself and filling the industry’s gaping financing void with its unprecedented offerings built around the needs of music professionals.

Founded by CEO Alex Heiche, Sound Royalties, LLC is a privately owned and funded one-stop source that helps music industry professionals get upfront cash based on future earnings potential while allowing the music professionals to retain the rights to their music and royalties. The company’s core business is offering noncredit-based advances and funding of anywhere from $5,000 to $10 million without having to deal with banks or traditional lenders, while preserving all rights to the artist’s music. To date, Sound Royalties, LLC has worked with a wide range of leading music industry professionals, including Grammy Award winners, platinum recording artists and notable music industry executives in every genre.