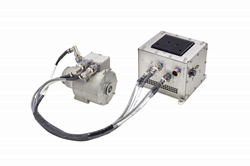 “The completion of NASA’s rigorous qualification testing is an important milestone and a validation of Calnetix’s advanced magnetic technologies, and we look forward to its operation in space in the coming months,” said Vatche Artinian, CEO of Calnetix Technologies.

“The completion of NASA’s rigorous qualification testing is an important milestone and a validation of Calnetix’s advanced magnetic technologies, and we look forward to its operation in space in the coming months,” said Vatche Artinian, CEO of Calnetix Technologies. “We believe the successful deployment and operation of the blower on the ISS will lead to enormous opportunities for the utilization of our magnetic bearing systems in future space and aerospace applications, such as fluid pumps, reaction wheels and gyroscopes that challenge conventional bearing technologies.”

“The vibration test backed by in-depth analysis fully validated the Calnetix system’s ability to survive the extreme launch environment to the ISS,” said Chris DellaCorte, Senior Technologist at NASA Glenn Research Center. “It’s a really impressive accomplishment to go from concept to approved flight hardware in such a short time. We believe this project will open the door to many future applications of magnetic bearing space mechanisms in future NASA missions.”

For this unique and demanding application, Calnetix worked closely with NASA to develop a system that includes a compact in-line blower on active magnetic bearings (AMBs), called Momentum™ and an integrated hybrid dual controller, called Continuum™ to drive the blower.

Calnetix’s Momentum™ in-line blower is an integral component of NASA’s CO2 removal system and is designed to drive the airflow through the system in a microgravity space environment. It uses magnetic bearings instead of conventional bearings to provide low transmitted vibration, high-speed levitation, low power consumption, high reliability, oil-free operation and tolerance to particle contaminants in the air stream. The controller supports speeds up to 60,000 rpm with long term maintenance-free operation. Calnetix’s AMBs were utilized to minimize drag losses and eliminate the need for lubrication, which was an important consideration in meeting NASA’s stringent outgassing requirements.

Key design criteria include the ability to survive extreme launch vibration and acceleration forces, operation of over 30,000 hours with no maintenance and very low conductive and convection cooling. The bearings are also designed to prevent introduction of contaminants, such as lubricants or grease into the airstream, and to tolerate the ingestion of particles and dust in the cabin air without incurring damage.

About Calnetix Technologies
Calnetix Technologies, LLC (“Calnetix”), headquartered in Cerritos, Calif., is focused on Innovation That Drives Industries®. The company specializes in high-performance, high-speed motor generators and best-in-class advanced magnetic bearings and control systems. Calnetix’s patented, underlying technologies, which have been in use since the company’s inception in 1998, have made Calnetix a world leader in the design and production of high-speed machines. The company’s overall technology portfolio and system integration capabilities have led to development and production contracts with industry leaders and the start of many successful subsidiaries that focus on unique niche markets. For more information, please visit http://www.calnetix.com.