Calnetix Technologies today announced that it has successfully designed and developed a high-speed in-line blower and a dual controller for NASA’s next-generation CO2 removal system. 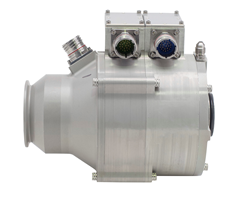 Calnetix Technologies today announced that it has successfully designed and developed a high-speed in-line blower and a dual controller for NASA’s next-generation CO2 removal system.

The design and development of the Four Bed Carbon Dioxide Scrubber (4BCO2) is being led by NASA and is planned for installation on the International Space Station (ISS) after rigorous ground testing at its facilities.

Calnetix was responsible for the development of the blower assembly, which includes a compact in-line blower on magnetic bearings, called Momentum™, and an integrated hybrid dual controller, called Continuum™, to drive the blower. The magnetically levitated in-line blower is an integral component of the CO2 removal system and will drive the airflow through the entire system in a microgravity space environment.

Calnetix’s Continuum™ Dual Controller consists of an AMB controller and a variable speed drive (VSD) motor controller in a single compact package that supports speeds up to 60,000 RPM with long-term maintenance-free operation. Calnetix’s AMBs were utilized to eliminate lubrication and rotating drag losses, which was an important aspect in meeting NASA’s stringent outgassing requirements.

In order to meet the application needs, the in-line blower system has the following features:

The main design challenge was to fit the new magnetic bearing blower into the same space as the foil bearing supported heritage blower, which is currently being used on the ISS. The AMB system with position sensors and backup bearings had to be miniaturized to fit into a highly constrained space. In order to create a compact design, the bearing system was centrally placed to be used with a centrifugal impeller positioned at the air inlet and an overhung permanent magnet motor at the outlet side of the machine. The air flows through an annular passage around the internal components.

“Having passed NASA’s rigorous testing, the 4BCO2 blower system is an important validation of our patented permanent magnet motor, magnetic bearing and new controller technologies,” said Vatche Artinian, CEO of Calnetix Technologies. “The flight hardware components supplied by Calnetix met all the critical design, performance, interface and environmental requirements for a compact and robust blower system. This is the first time a commercial technology of this kind has been qualified for aerospace and flight application.”

Upon successful use of the magnetic bearing blower on the ISS, magnetic bearings could also be used in other aerospace applications, such as fluid pumps, reaction wheels and gyroscopes that challenge conventional bearing technologies.

Calnetix Technologies, LLC (“Calnetix”), headquartered in Cerritos, Calif., is focused on Innovation That Drives Industries®. The company specializes in high-performance, high-speed motor generators and best-in-class advanced magnetic bearings and control systems. Calnetix’s patented, underlying technologies, which have been in use since the company’s inception in 1998, have made Calnetix a world leader in the design and production of high-speed machines. The company’s overall technology portfolio and system integration capabilities have led to development and production contracts with industry leaders and the start of many successful subsidiaries that focus on unique niche markets. For more information, please visit http://www.calnetix.com.