Ten years to the month of the supergroup's first full-length offering, Camera Soul's new Jazz-Funk and Nu-Disco album "Esagerato" releases globally on May 14, 2021. 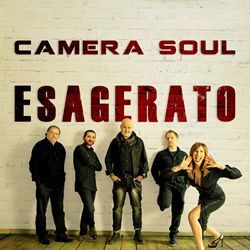 It may be interesting to note that a 2021 release follows an established pattern of releasing Camera Soul studio albums in odd-numbered years.

The new album promises plenty of upbeat, top quality Jazz-Funk, Nu-Disco, and Neo Soul, as craved by its growing and dedicated global fan base, and continues its longtime engineering partnership at A.MA Studios in Bari (Italy), where it was expertly recorded, mixed, and mastered.

It may be interesting to note that a 2021 release follows an established pattern of releasing Camera Soul studio albums in odd-numbered years. Furthermore, with exception to the eponymous Italian album and title track name, Camera Soul's lyrics are primarily in English in order to appeal to a worldwide audience. The band's roster, with lead vocals from Maria Enrica Lotesoriere, boasts the same powerful lineup as its 2019 hit album, "Existence", and each release since 2014.

'Esagerato's release is a celebratory event throughout May 2021, beginning with the release of the title single on April 30, followed by the full digital album through all major global outlets (iTunes, Amazon, etc) on May 14, and next on CD (Italy, Japan) after May 16.

Finally, for the first time ever, Azzurra Music will also offer a special, limited edition on vinyl, available exclusively at https://www.azzurramusic.it.

Fans can also stream the new album, as well as the entire Camera Soul catalogue, with exclusive subscriber access through American partner label, TIMKAT Entertainment, at timkatent.bandcamp.com. It should be noted that legal downloads from Azzurra and TIMKAT most closely support these independent artists, compared to all other digital options.

Pending the lifting of regional COVID restrictions, the group is available to be booked for live performances through MCM Agency, which represents top jazz artists such as Billy Cobham and Stanley Jordan.