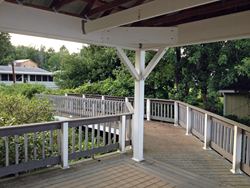 Chris Warren of Warren Builders says his deck building firm is dedicated to safer decks and docks. He selected CAMO Edge Fastening for his own Trex dock.

Splinters, nails and screw pops find their way into the feet of unsuspecting guests. Families don’t want to turn their fun, outdoor event into a first aid lesson. That’s why we say CAMO® is barefoot approved™.--Scott Baker, National Nail

CAMO Edge Fastening joined forces with the North American Deck and Railing Association, Inc. (NADRA), in supporting Deck Safety Month in May to help increase public awareness of the necessity for regular inspection and maintenance of existing decks, and proper installation of new decks. National Nail’s CAMO Edge Fastening is one technology that can help contractors make decks safer for homeowners.

Unlike traditional fasteners that are nailed or screwed through the top or face of the deck board, the proprietary Edge Fastening system guides the unique CAMO® screws through the edge of the boards. Applying the screws in this manner eliminates the safety issues normally associated with traditional face fastening. Edge fastening greatly reduces the cracking and splitting of deck boards that leads to splinters while also eliminating the common issue of nails and screws working themselves out of the deck board surface. Scott Baker, CEO and President of National Nail states, “Splinters, nails and screw pops find their way into the feet of unsuspecting guests. Families don’t want to turn their fun, outdoor event into a first aid lesson. That’s why we say CAMO® is barefoot approved™.”

Another safety advantage to CAMO Edge Fastening is the holding power of the deck board is greatly improved due to the angle which the screws enter the deck board and attach directly to the sub-structure. This system virtually eliminates deck board movement which is a common problem with deck clips. “With CAMO, you get a solid, stable board. If there is ever an issue with a board I can back the screws out to replace it where I can’t with typical hidden clips,” said Billy Lecorchick, owner of Legends Home Improvements in Monroe, NJ.

“Contractors or homeowners using wood, composites or PVC are fastening their decks with CAMO Edge Fastening for safer, fastener-free surfaces,” said Greg Palmer, Director of Marketing, National Nail/CAMO. “Edge-fastened decks prevent fastener caused splitting or cracking that increases weather and moisture access to the deck material-- which can add to and increase degradation of the deck board. The deck surface is also safer for bare feet with no raised screw heads, which can also get hot in the sun. These are all important safety factors for homeowners. “

Chris Warren of Warren Builders, State College, PA, agrees and said, “With the new wave of composites and pvcs, no one screws deck boards the old-fashioned way anymore. The edge-fastened decks do not allow water seepage into exposed openings around face-screws or into cracks or splits.”

To learn more about deck safety, visit NADRA's website at http://www.NADRA.org for their video and Check Your Deck - 10-Point Safety Checklist. For more information about CAMO Edge Fastening visit http://www.camofasteners.com.

About CAMO Edge Fastening
CAMO Edge Fastening™ from National Nail delivers beautiful, fastener-free, Barefoot Approved™ results with virtually any wood, composite or PVC decking. CAMO® offers a variety of guides, fasteners, and accessories, as well as a collated system to suit project requirements. For more information or to locate a dealer, visit CAMO Fasteners or call 1-800-968-6245. Be sure to “Like” CAMO® Fasteners on Facebook.