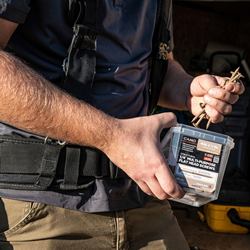 “The CAMO team is excited to unveil CAMO Structural Screws, the next generation of structural fasteners to help builders with the deck structure and beyond." -- Doug Hutchings, Vice President of Product Development, National Nail.

“The CAMO team is excited to unveil CAMO Structural Screws, the next generation of structural fasteners to help builders with the deck structure and beyond,” said Doug Hutchings, Vice President of Product Development, National Nail. “The new screws offer builders excellent holding power and stronger connections.”

CAMO’s new six-inch Truss Screws helps contractors make connections easier, faster, and better. They replace hurricane ties for general interior construction and exterior decking applications. The hands-free Truss Guide included in every pail helps contractors fasten at the right angle every time. Above and beyond most structural screws, the CAMO Truss screw can be used in interior wall and exterior beam-to-joist connections.

Offered in a variety of lengths, new CAMO Ledger Screws are a faster, less-expensive way to install ledger boards. The screw’s flat head finishes flush with the material, so it doesn’t get in the way of joist hangers or other materials. These screws can also be used in multi-ply applications.

CAMO Multi-Purpose Screws are available in Flat and Hex head and replace lag bolts and through-bolts for framing. In addition to CAMO's PROTECH ULTRA 4 Coating, they are available in hot-dip galvanized options for coastal applications.

About CAMO
CAMO exists to provide the best deck fastening installation experience for hardworking doers who take pride in their work and value their wallet. CAMO products are engineered to save you time and ensure your work looks and performs as you expect it should. CAMO®. The Better Way to Build a Deck. For more information or to locate a dealer, visit the CAMO Fasteners website or call 1-800-968-6245. Be sure to "Like" @camofasteners on Facebook and @camodeckfasteners on Instagram. Search CAMO Fasteners on YouTube to find our channel.