In celebration of United Camps, Conferences & Retreats' (UCCR) 50th Anniversary, a guide for Restorative Practices in Nature, written and published by UCCR, will be made available to all guests visiting their sites. 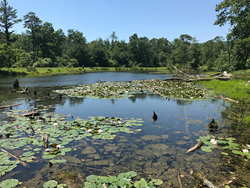 United Camps, Conferences & Retreats (UCCR) has announced that during their 50th anniversary in 2020, sites will emphasize “Restorative Practices in Nature” to spotlight the natural settings UCCR manages where groups can stay, play, meet and eat...and relax.

In 2015, Stanford University conducted a study (published in Proceedings of the National Academy of Science) which showed getting out into nature reduces risk for depression and anxiety while increasing cognitive function and memory. In Japan, for example, forest bathing called Shinrin-yoku, is becoming a more integral part of preventative health care and healing in Japanese medicine.

The many camp, conferences and retreat sites managed by UCCR are all located in natural settings. “We want to help our guests get out and enjoy nature by taking a walk or practicing quiet observation,” says UCCR Director of Reservations & Communications Tina Heck. “We know through the studies that have been made in recent years, the many voices in literature, and, of course, our own practices, that spending time in nature helps reduce the stresses of everyday life and promotes well-being. I would venture to say it even inspires and awakens creativity,” says Heck.

Beginning in January 2020, each UCCR site will be equipped with a Restorative Practices in Nature handbook for guests to utilize during their visit. “The guides will include simple activities such as Silent Observation, Wildlife Watching, Meditative Walking, and more. We hope our guests will take even a few minutes during their stay with us to go outside and walk or sit in nature in quiet and breathe, listen, relax.”

The facilities managed by UCCR are all retreat centers or camps. Each one was built by a church denomination or non-profit organization which believed in the potential of nature to provide a peaceful, calming, and inspirational setting to its visitors. Some of the camp and retreat properties were established over 100 years ago. Most were developed in the mid twentieth century as churches responded to the wave of organized camping pursued by church members.

“We understand and appreciate that UCCR is coming full circle to celebrate our 50th anniversary as a non-profit organization by recognizing the essential perspective of these camp and retreat property owner groups who counted on nature’s tranquility to provide the better part of their program,” says Heck. “Today, the opportunity to put away our phones and computers and enjoy the simplicity of the wind fanning the trees, is truly calming the body, mind, and spirit, in the same way it did 50 years ago in these same places.”

UCCR manages camp, conference and retreat sites throughout the United States. They may be reached at 800-678-5102 or on the web at UCCR.org.