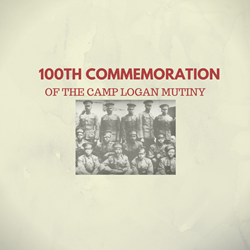 The Buffalo Soldiers National Museum is hosting a week's worth of free events and activities August 21-26 in remembrance of the Camp Logan Mutiny, a clash between white Houston police officers and black WWI soldiers 100 years ago. View the Camp Logan media kit here.

To mark the anniversary of this milestone in U.S. history, the Buffalo Soldiers National Museum will unveil a new exhibit detailing the events of the Camp Logan Mutiny and featuring memorabilia from World War I and the African American soldiers of the Third Battalion of the Twenty-fourth United States Infantry Regiment.

In addition, the week of events will also feature exhibit tours; a speaker series including descendants of soldiers and police officers; reenactment of the mutiny; documentary viewing of "Mutiny on the Bayou" and panel discussion; tombstone placement ceremony; marker re-dedication; and book signing by author Angela Holder.

Several notable academics will participate in the speaker series, taking place Saturday, August 26 at the museum. Speakers include:

Paul Bentley, author of All Blood Runs Red and My Torrington Days: A Collection of Writings

Angela Holder, curator and professor of history at Houston Community College, and great niece of Corporal Jesse Moore, who was among the members of the 24th Infantry

Visitors traveling to Houston for the events may receive a special rate through a partnership with SpringHill Suites Houston Downtown/Convention Center.

ABOUT THE BUFFALO SOLDIERS NATIONAL MUSEUM
The Buffalo Soldiers National Museum exists to educate the public about the experiences and contributions of America’s Buffalo Soldiers and to preserve the history and traditions of African American soldiers from the Revolutionary War to the Persian Gulf War. The museum is a501(c)(3) nonprofit organization founded in 2000 by Vietnam veteran and African American military historian Captain Paul J. Matthews.