In the first Virtual WCOPA, Azym – and his home country – performed with flying colors. 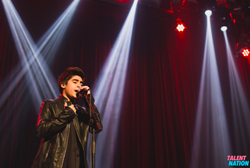 Canadian artist Azym needed only a minute to once again prove that he is a prodigy when it comes to singing. The 24th Annual World Championship of Performing Arts was held from July 24th-August 1st 2020, with this year’s competition being the first virtual one, in light of COVID-19.

Contestants could enter into seven different categories of performance, divided into junior and adult sections. Each contestant, besides those performing in the variety arts category, could only send in a 60-second video demonstration of their talent.

“This is the only truly Olympic-style talent competition ever created,” says Griff O’Neil. O’Neil is the competition’s CEO and a veteran of the industry, having formerly been an executive of the Miss Universe Pageant.

Team Canada tied for second place in the WCOPA’s medal standings, with six finalists and four world champions. Azym, having qualified to be a finalist, participated as a vocalist. The Canadian artist took home a junior silver medal for his timed, yet awe-inspiring singing performance, contributing to the team’s win. Azym congratulated the other Canadian contestants on their overall victory, stating on his Facebook that he is “glad to be part of the team!”

Azym’s success in this year’s WCOPA continues his impressive streak of musical wins and accomplishments, despite his youthful age. Though only 15 at the time, Azym is already one of Canyon Entertainment Group’s featured artists and has certainly shown himself to be worthy of the position.

"Since a young age I've been in love with singing and performing," Azym says. "Music has always been in my heart and soul."

Other accolades include: after being scouted, the young Canadian artist won the International Models and Talent Agency’s (IMTA) monologue competition and was the first runner-up in IMTA’s singing competition. He has also exhibited his vocal talents at CMTC and the KYD CAN SING RECITAL, among other events. Azym’s career has only just started, but it’s clear that his potential is immense.

Listen to his newest release “One and Only” here: https://www.youtube.com/watch?v=7pzmuCeBF84&ab_channel=Azymofficial