Some Like It Hot: How A Temperature Gauge Transformed The Coffee Industry – An in-depth interview with the creator of the Scace Device sheds light on one of the industry’s most important innovations of the past 55 years 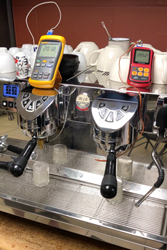 Until Scace’s 2005 invention, the espresso machine industry had not seen a revolutionary enhancement in almost 40 years.

The Canadian Barista Academy is on a mission to improve the quality of coffee across Canada. The Academy team takes their passion for coffee to the next level through providing education for aspiring baristas. And as part of its mission of educating coffee business startups and baristas in all matters concerning the perfect cup of coffee, the institute recently released an in-depth look at one of the most important tools of the trade, the Scace Device.

Les Kuan, a Canadian Barista Academy Co-Founder, Head of Curriculum, and Dean of the Calgary and Vancouver campuses, recently sat down for an telling interview with Greg Scace, creator of the Scace Thermofilter Device, the cutting-edge tool for monitoring temperature and pressure in espresso machines.

In the interview, Kuan and Scace cover a wide range of topics, including Scace’s involvement in the Third Wave Coffee Movement since the 2000s and the eventual creation of his industry-revolutionizing device. Prior to 2005, users of espresso machines had no idea of the temperature variance of +/- 15 degrees Fahrenheit. There was no pressure on manufacturers to improve these variances until the Scace Device revealed tangible data. Until Scace’s 2005 invention, the espresso machine industry had not seen a revolutionary enhancement in almost 40 years.

Scace’s innovative temperature-tracking device increased awareness of the ways that temperature affects the taste of coffee. By utilizing this information or building in the Scace Device, espresso machine manufacturers now had a way to create near-temperature stable machines. And armed with this new technology, café owners rejoiced, knowing that they could now deliver more consistent tasting coffee day in and day out—an expected demand from any coffee enthusiast.

To read the full interview with Greg Scace, visit https://canadianbaristainstitute.com/blogs/celebrities-and-insiders/scace-coffee-tool.

About The Canadian Barista Academy
As the first coffee school in Canada devoted to coffee business startups, education, and hands-on barista training, the institute is committed to educating aspiring baristas to improve the quality of Canada’s coffee, one cup at time. To learn more, visit https://canadianbaristainstitute.com/.

For more information about the Canadian Barista Academy or for media inquiries, please contact Jamie van Dam at jamie@canadianbaristainstitute.com