A new solver is being developed that uses flow-sweep algorithm allowing to significantly increase the accuracy of current and flux calculations. The solver is intended to be used in Siborg's 2D Semiconductor Device Simulator MicroTec and in the 3D Poisson/Heat Transfer Solver SibLin. 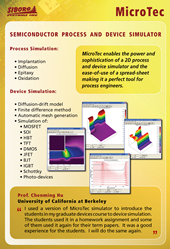 Siborg Systems Inc. from Waterloo, Ontario, Canada, is establishing a connection with the University of Waterloo, a world renowned academic institution, particularly in Computer Science.

In semiconductor structures the convective (drift) term coefficient may vary more than twenty orders of magnitude leading to a loss of accuracy when evaluating current densities. The results of such inaccuracy are instabilities of the non-linear iteration for the semiconductor device system of equations. This instability is especially critical for semiconductor structures with the so called floating regions, that is, the regions very weakly coupled to the neighboring regions as well as the boundaries.

For one-dimensional problems, accurate solution to problems involving with strongly varying coefficients is the so-called flow-sweep method, where the equations are solved in terms of flows rather than in terms of basic variables, thus eliminating the use of differentiation for evaluation of flows. The extension of the flow-sweep method to multi-dimensional problems is not straightforward. Even if a rectangular simulation grid is used, flux balances at every node involve fluxes from neighboring cells in all directions, two fluxes in every dimension. Therefore it is not clear how to eliminate explicit use of derivatives of the basic variables from the computational process. The situation is even more complex if a non-rectangular grid is used. In this case the number of fluxes involved at each node is varying and therefore programming becomes very difficult.

The project brings together a research group with extensive experience in scientific computing and a leading company providing device simulations solutions. The University of Waterloo Prof. Lilia Krivodonova has about twenty years of research experience with major focus on developing numerical methods for solution of partial differential equations. Siborg is involved in development of TCAD tools since 1994 with a number of conference and journal publications in this area.

MicroTec is true two-dimensional semiconductor process and device simulator a somewhat simplified TCAD tool that was primarily used by smaller semiconductor companies such as Linfinity Microelectronics, Garden Grove, CA: GHz Technology, Santa Clara, CA; but also by some major semiconductor manufacturers such as Integrated Device Technology, Hitachi, National Semiconductor, Texas Instruments, Rockwell, Matsushita, etc. Most of Siborg's industrial clients are in power semiconductors and solar cell industry although recently there was also some interest from optical and infra-red sensor companies, such as Sensor Creations from Camarillo, California.

MicroTec has an excellent record for teaching use, especially after publication of a limited capability version of this program by John Wiley & Sons as a supplement to Ton Mouthaan's book “Semiconductors Devices Explained” in 2000. It was used by more that 150 Universities worldwide including leading schools such as UC Berkeley, University of Wareloo, Waseda University and Tokyo University of Technology.

As an educational semiconductor process and device simulation tool, MicroTec and the three-dimensional Poisson equation solver SibLin are fast, simple and easy to learn.