CanAm Enterprises has funded another EB-5 investment, raising the amount of capital provided for the construction of One Willoughby Square in Downtown Brooklyn to $90 million, accounting for 180 EB-5 investors in total. 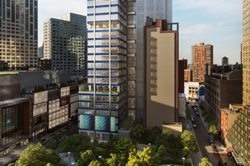 Following additional job creation projections related to the strong leasing activities at One Willoughby Square, CanAm opened the EB-5 project to additional investors in Phase Two of capital raising. Forecast job creation calculations allocate between 17 and 18 jobs per EB-5 investor. Overall, it is expected to create more than 3,100 Program-qualifying jobs, which will provide all EB-5 investors an even greater job cushion to meet USCIS requirements. In addition, the Form I-924 for the Phase One funding has already been approved by USCIS.

Being already topped at 495 feet, One Willoughby Square is the tallest office tower in Brooklyn and offers panoramic 360-degree sightlines of New York Harbor, the Lower Manhattan skyline, and Brooklyn. The building will feature floor-to-ceiling glass and column-free floor plates covering 50-foot spans, which will create the illusion that sections of the office tower are floating. The building will also feature retail space on the bottom two floors of the building, the ground floor and the first underground level.

“One Willoughby Square is situated in a premium location that has seen a great influx of large companies, businesses, restaurants, and retail stores. With an occupancy rate of 96%, the demand for office space in Downtown Brooklyn is at an all-time high,” commented John Reid, Director of Project Development at CanAm Enterprises.

One Willoughby Square has already secured two anchor tenants – the New York City School Construction Authority and a prominent architecture firm, FXCollaborative, who also designed the tower. Construction at the site started in February 2018 and is anticipated to be substantially complete in Q4 2020.

The EB-5 Immigrant Investor Program is administered by the United States Citizenship and Immigration Services (USCIS). The Program provides qualified foreign investors with the opportunity to earn “conditional” or temporary two-year visas in return for investing $500,000 (or $900,000 after November 21, 2019) in businesses located in high unemployment areas that create or retain at least ten permanent full-time jobs for U.S. workers.

About CanAm Enterprises
With three decades of experience promoting immigration-linked investments in the United States and Canada, CanAm has a long and established track record. Basing its business on a reputation of credibility and trust, CanAm has financed nearly 60 projects and raised more than $2.8 billion in EB-5 investments. More than $1.3 billion in EB-5 capital from over 2,600 families has been repaid by CanAm’s 40 projects to date. CanAm exclusively operates seven USCIS-designated regional centers that are located in the city of Philadelphia, the Commonwealth of Pennsylvania, the metropolitan regions of New York & New Jersey, the states of California, Hawaii, Florida, and Texas. For more information, please visit canamenterprises.com