A $12 million EB-5 investment that was used by Rhoads Industries to help fund the expansion of its industrial manufacturing facilities at the Philadelphia Navy Yard was repaid in full and early. 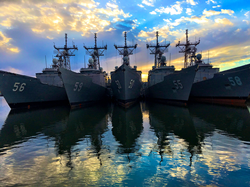 “We are thrilled that great businesses like Rhoads Industries have been able to continue growing at the Navy Yard and creating jobs for Philadelphia through EB-5 investment from our partnership with CanAm.” said PIDC President, Anne Bovaird Nevins.

CanAm Enterprises (“CanAm”) is very proud to announce that its $12 million EB-5 investment in Rhoads Industries (“Rhoads”) was repaid in full and early this week.

Founded and family-owned since 1896, Rhoads provides heavy industrial fabrication, installation and maintenance for commercial and government contracts, delivering products from turbines to submarine engines. In 2006, CanAm made a $7 million EB-5 investment in Rhoads Industries so that it could consolidate more than 200,000 square feet (“SF”) of fabricating shops and warehouses in three separate facilities around Philadelphia into a single complex at the Philadelphia Navy Yard, a former U.S. Naval Base that has been converted by the City of Philadelphia into a 1,000-acre mixed-use industrial park. With the move, Rhoads increased its capabilities to encompass larger fabricated components and assemblies, which allowed it to expand its customer base to a global level; it also became a growing presence at the shipyard sector of the Philadelphia Navy Yard. That $7 million EB-5 loan was repaid in full in 2011, having created more than enough jobs for its EB-5 investors and all the filed I-829 petitions were approved.

Recognizing the potential to combine its industrial fabrication capabilities with advanced technology to fulfill government contracts at the Philadelphia Navy Yard, in 2014, CanAm funded a second EB-5 loan to finance Rhoads’ expansion plans. As a result, Rhoads doubled its facility capabilities by acquiring and expanding its operations to include a 241,863 SF industrial building, a 69,000 SF industrial space and a 16,000 SF office space. The EB-5 investment also generated job creation which far exceeded the requirement of 10 jobs per investor, therefore meeting all EB-5 program requirements.

“Rhoads Industries is a family-owned, Philadelphia-based business that provides jobs and specialized job training to fulfilling its industrial contracts for the U.S. government, including the U.S. Navy. When I met Dan Rhoads for the first time more than ten years ago, I knew he was the kind of business owner that could really benefit from EB-5 financing, one who was committed to helping local Philadelphians and expand the City’s ambitious development plan for the Navy Yard. It’s been amazing to see the Rhoads success story become part of the larger Navy Yard success story. When Dan called me to tell me he wanted to repay us early, I couldn’t wait to share the news with our investors”, commented Tom Rosenfeld, President and CEO of CanAm Enterprises.

“Our 16-year partnership between CanAm and PIDC has been invaluable as a resource for investment in Philadelphia projects,” said PIDC President, Anne Bovaird Nevins. “We are thrilled that great businesses like Rhoads Industries have been able to continue growing at the Navy Yard and creating jobs for Philadelphia through EB-5 investment from our partnership with CanAm.”

The EB-5 Immigrant Investor Program (EB-5 Program) is administered by the United States Citizenship and Immigration Services (USCIS). The EB-5 Program provides qualified foreign investors with the opportunity to earn a conditional, or temporary, two-year green card in return for investing $900,000 in projects located in high unemployment areas that create at least ten permanent full-time jobs for U.S. workers.

About CanAm Enterprises
With three decades of experience promoting immigration-linked investments in the United States and Canada, CanAm has a long and established track record. Basing its business on a reputation of credibility and trust, CanAm has financed 60 projects and raised nearly $3 billion in EB-5 investments. More than $1.4 billion in EB-5 capital from over 2,800 families have been repaid by CanAm’s 42 projects to date. CanAm exclusively operates seven USCIS-designated regional centers that are located in the city of Philadelphia, the Commonwealth of Pennsylvania, the metropolitan regions of New York & New Jersey, the states of California, Hawaii, Florida, and Texas. For more information, please visit http://www.canamenterprises.com.