Leading cancer researcher Sanjiv Agarwala, MD, was impressed by the results: After injecting a patient’s cancerous tumors with an experimental medicine derived from a fuchsia-colored liquid from his native India, called Rose Bengal, the tumors simply shriveled up and flaked off. 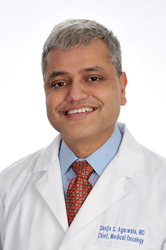 After injecting a patient’s cancerous tumors with an experimental medicine derived from a fuchsia-colored liquid from his native India, called Rose Bengal, the tumors simply shriveled up and flaked off.

Leading cancer researcher Sanjiv Agarwala, MD, was impressed by the results: After injecting a patient’s cancerous tumors with an experimental medicine derived from a fuchsia-colored liquid from his native India, called Rose Bengal, the tumors simply shriveled up and flaked off.

Dr. Agarwala, chief of oncology at St. Luke’s University Health Network in Bethlehem, Pa., is the national principal investigator for a study, sponsored by Provectus Biopharmaceuticals Inc., into this medicine’s potential cancer-killing properties.

Bethlehem resident, James McCandless, enrolled in the study in 2018 after several tiny cancerous moles were found on his scalp. Skin cancer is responsible for more some 7,000 deaths each year in the U.S., according to the American Cancer Society.

The fair-skinned 81-year-old man has a troubling history with skin cancer and is being treated currently for stage 4 metastatic melanoma on his liver with the FDA-approved drug Keytruda.

McCandless had three injections of the Rose Bengal derivative, also known as PV-10, over several months. Shortly after each of them, the moles shrank, dried out and flaked off, leaving slight scars in their place.

“They worked wonders,” says Violet, his wife, of the shots.

An international authority on melanoma, Dr. Agarwala reported on progress in this PV-10 research at the American Society of Clinical Oncology’s annual meeting in Chicago in early June. He describes the results so far as promising, adding that the injection has few side effects.

His patient agrees and adds that the Keytruda infusions he receives at the SLUHN Cancer Center have reduced his liver tumors to mere “spots.” Though slightly fatigued by the treatments, and having lost some 20 pounds, McCandless still visits his rural vacation home weekly and enjoys his morning walks or lifts weights daily, taking the inconveniences all in stride.

About St. Luke’s
Founded in 1872, St. Luke’s University Health Network (SLUHN) is a fully integrated, regional, non-profit network of more than 15,000 employees providing services at 10 hospitals and 300 outpatient sites. With annual net revenue greater than $2 billion, the Network’s service area includes 10 counties: Lehigh, Northampton, Berks, Bucks, Carbon, Montgomery, Monroe and Schuylkill counties in Pennsylvania and Warren and Hunterdon counties in New Jersey. Dedicated to advancing medical education, St. Luke’s is the preeminent teaching hospital in central-eastern Pennsylvania. In partnership with Temple University, St. Luke’s created the Lehigh Valley’s first and only regional medical school campus. It also operates the nation’s longest continuously operating School of Nursing, established in 1884, and 28 fully accredited graduate medical educational programs with 226 residents and fellows. St. Luke’s is the only Lehigh Valley-based health care system with Medicare’s five- and four-star ratings (the highest) for quality, efficiency and patient satisfaction. St. Luke’s is both a Leapfrog Group and Healthgrades Top Hospital and a Newsweek World’s Best Hospital. In 2019, three of IBM Watson Health’s 100 Top Hospitals were St. Luke’s hospitals. St. Luke’s University Hospital has earned the 100 Top Major Teaching Hospital designation from IBM Watson Health seven times total and five years in a row. St. Luke’s has also been cited by IBM Watson Health as a 50 Top Cardiovascular Program. Utilizing the Epic electronic medical record (EMR) system for both inpatient and outpatient services, the Network is a multi-year recipient of the Most Wired award recognizing the breadth of the SLUHN’s information technology applications such as telehealth, online scheduling and online pricing information. St. Luke’s is also recognized as one of the state’s lowest cost providers.